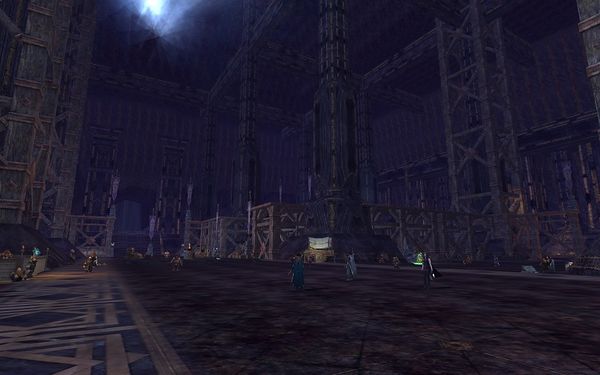 The Twenty-first Hall is a settlement located in the central portion of Moria, north east of Zelem-melek [5.8S, 105.1W]

There are also some step by step directions for travelling to and from the 21st Hall.

The following services can be found within The Twenty-first Hall:

The Twenty-first hall is among the largest in all of Khazad-dûm, and often regarded as the most famous. In times long past a great market stood here where the Dwarves of Moria and travellers from abroad would trade in fine goods from across much of Middle-earth. Fine woods and wine and foodstuffs would be exchanged for gold and priceless gems and finely wrought pieces of smith-craft. In truth nearly anything at all could be bought or sold within this very hall, though it is hard to imagine it to look upon it now.

The Twenty-first Hall of Khazad-dûm lies on the Seventh Level of Moria, leading away in many directions including toward the Second Hall and the Bridge of Khazad-dûm. Off to one side, a passage leads to the Chamber of Mazarbul, the dwarves’ hall of records, though it passes now for the tomb of Balin, son of Fundin.

The Twenty-first Hall beats as the heart of the Free Peoples in the gloomy body of Moria. When you suffer the inevitable setback of defeat in the troubled halls of northern Zelem-melek, this is your retreat.

On its own, as an artifact of craftsmanship, the hall is a marvel. Wide-footed pillars as large as the towers of the Elves hold up a ceiling so high that its polished stone is barely touched by the glow of campfires and crystals below. A shaft in the ceiling lets in a single, hopeful ray of sunlight from the distant sky above the Misty Mountains. This ray illuminates the banners and wagons of Moria’s new colonists on the floor below.

The chamber is so vast that the largest outpost of the Free Peoples in Moria occupies less than half its ground. The outpost itself is wrought of wooden beams and planks, forming palisades between the hall’s colossal pillars. Archers stand watch all around.

The outpost protects traders, trainers, vault-keepers, and auctioneers. Here you’ll find an oven, a forge, a workbench, and a reflecting pool—rare finds, all, in the dark reaches of Moria. Be sure to acquaint yourself with the Stable-master, as you won’t find another east of here until you reach the East-gate of Moria, on the far side of Nud-melek.

Fallen rubble blocks the largest exits from this hall, the arches leading west and east. Only the smaller arches — leading north to Durin's Way and south to the Great Hall of Durin — remain open. Perhaps it’s the lingering power of the intimidating Dwarf architecture all around these exits that helps to keep the Enemy away — or maybe it’s luck — but the Twenty-first Hall remains free of Orc patrols and spies for now.