This page is about the class. For the race, see Beorning (Race).

The Beorning class is one of the playable classes in Lotro. It was added to the game with Update 15 - Gondor Aflame, in 2014.

Gameplay: Beornings are skin-changers that can change into the form of a bear in combat. They focus their wrath while in bear form, choosing to deal grievous blows or bolster their own resolve. While skilled in combat, some Beornings also choose to wield their knowledge of the wilderness to assist their allies.

Lore: The Beornings of Middle-earth are a largely reclusive people. They trace their ancestry to Beorn himself, and spend most of their time deep in the wilderness. The solitude of the forest gives little comfort in recent times, with the enemy encroaching from all sides. The time has come for the descendants of Beorn to lend their strength to the Free People of Middle-earth.

This class is inspired by Beorn, who bravely stood with the Free Peoples during the Battle of Five Armies. 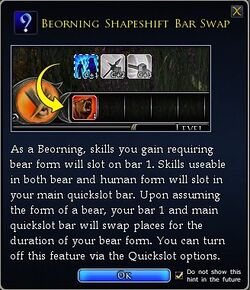 Beornings are designed to be a dynamic skin-changer class. A Beorning can alternate back and forth between forms (or stances) almost at will, dependent only upon their level of Wrath. There are two ways to do so: 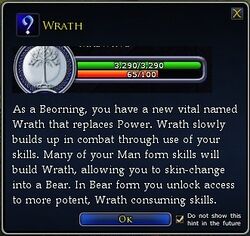 As a Beorning, you have a new vital named Wrath that replaces Power. Wrath builds up in combat through use of your skills. Many of your Man form skills will build wrath, allowing you to skin-change into a Bear. In Bear Form you unlock access to more potent, Wrath consuming skills. Wrath state is not maintained between logons so your character will always start with zero Wrath upon login.

The Beorning can fulfil different roles with their three specializations:

These skills are acquired by spending trait points in the Hide (blue) trait tree. You can only obtain the Set skills if you specialize in this tree.

These skills are acquired by spending trait points in the Claw (red) trait tree. You can only obtain the Set skills if you specialize in this tree.

These skills are acquired by spending trait points in the Roar (yellow) trait tree. You can only obtain the Set skills if you specialize in this tree.