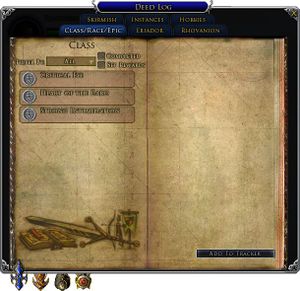 Deeds are special tasks which reward the character with Items, Skills, Titles, Traits, Lotro Points, and more. There are several different types of Deeds.

The Deed Log (see image to the right, below ToC) presents each deed with some sort of wax seal. Generally the seal indicates the type of deed, such as a spyglass for Exploration Deeds, or crossed swords for Slayer Deeds; see Deeds by Type below.

The Deed Log provides nine main pages, seen on tabs at the top of the deeds window (see image to the right). They are named: Skirmish, Instances, Hobbies, The War, Class/Race/Epic, Eriador, Rhovanion, Gondor, and Mordor. The last four are usually referred to as "regional deeds" on Lotro-Wiki. Except for Hobbies each page has sub-pages available via tabs at the bottom of the window for more specific purposes. This section describes those nine page in detail.

There are two sorts of deed types at the Skirmish tab.

This deed type usually involves slaying all the different Encounters in each specific Skirmish. Rewards are a Skirmish specific title. In the special skirmish Barrow-downs Survival there are additional deeds just for surviving.

This deed type involves slaying Lieutenants of certain types who appear in the Skirmish. The deeds involve slaying 5 and 50 of each type of Lieutenants and reward 50 and 500 Marks respectively. These mobs appear randomly in Skirmishes.

At the page for World Instances, each instance has its own tab. Some of these deeds also contribute to meta-deeds. Rewards from instance deeds include regional reputation points, Titles, Lotro Points, Virtue Experience, and more.

Filter: The available filters are "Lore" and "All":

The Sundering of Osgiliath Deeds

This page has four tabs for Class, Race & Social, Epic, and Reputation respectively. Each of these tabs has different filtering options for different deed types.

Most deeds in the Class tab are based on your class.

A character leaving the Starter Area achieves the Novice passive skill, then when using some of your class skills unlocks class deeds. Most class deeds require certain skill(s) being used a certain number of times, and some deeds need critical hits too. The skills may be active like Penetrating Shot as well as passive like Parry. Completing a class deed is rewarded with Lotro Points. Each class deed has its own daily limit of progression. When the limit is reached, the deed's progress bar in Deed Log becomes bright-yellow. The limit is reset at 12:00 a.m. server time.

Do note, deeds for damage-causing skills require the level of the targets must be close to the level of the character level for the counter to increment. If the enemy's name reads in grey it will not count.

Filter: The available filters are "Lore" and "All":

Filter: The available filters are: All, Explorer, Lore, Reputation, and Slayer.

Once a character has reached certain levels, Racial deeds are unlocked by defeating creatures which are most hated by your race. Defeating enough of those creatures will complete that deed and grant you a Racial Trait.

Social deeds involve event and festival deeds, or from being the target of another player's emotes (e.g. /hug or /crazy). They reward for example festival tokens, titles, special emotes, and more.

Epic Deeds are advanced by completing each book of the Epic Quest line. Shadows of Angmar has two title rewards, while Mines of Moria has three. Epic Deeds also include such deeds as the Discovering the Descendant deed and other deeds related to the Epic story-line in some way.

Notice: Other deed-types may be filtered for "Reputation". Those "reputation deeds" are sub-types of their parent deed type respectively but are not considered being a "Reputation Deed" described here. However, see the "Deeds by Type" section below.

Filter: The available filters are: All, Explorer, Lore, Reputation, and Slayer.

As implied by the several wax seals there are several deed categories. At Lotro-Wiki we categorize deeds as they appear in the Deed Log, but we also narrow down per region, making it possible to find for example all slayer deeds available in Bree-land.

Your character has probably activated and is advancing certain deeds without being aware of it, those deeds are called Hidden Deeds. Such deeds may be furthered by own actions, but also by being target of other character's actions, such as being the target of certain emotes.

Hidden deeds are revealed when upon deed completion and rewards are granted.

Some Deeds are activated upon completion of another deed, they are called Meta-deeds. To complete a meta-deed your character must complete several other deeds. However, considering the rewards it may be worthwhile completing these meta-deeds, in spite of the considerable effort.