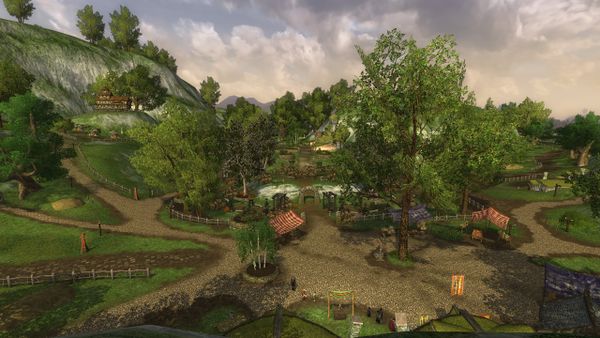 Michel Delving is a settlement located within the area of the Delving Fields, in the Shire. [33.9S, 75.0W]

This is the chief township of the Shire, hosting the Mayoral Seat and several offices of the Mayor and the bounders; indeed by many hobbits considered to be the 'capital' of the Shire. For locals and strangers it provides an auction house, a training hall, vendors, and south of town a craft-fair coming second to none. Finally, Michel Delving is the proud host of the Mathom House which is the museum and mathom-store of the world.

Michel Delving has been the chief city for hundreds of years, embracing the Great East Road as it entered the Shire from the desolate western Far Downs, the city has indeed seen its fair share of strangers and queer folks coming and going. However, with the Downs Gate safely shut the hobbits seem to have forgotten all about the outside world and now spend their time gossiping and planning for the next breakfast, or remembering the one they just ate, unless shopping groceries.

Hence, this is a great place to explore for those who are new to the Middle-earth, whether hobbit or not. In Michel Delving the scariest that happens is somebody playing you a prank, or if you cannot find the others while playing hide and seek. 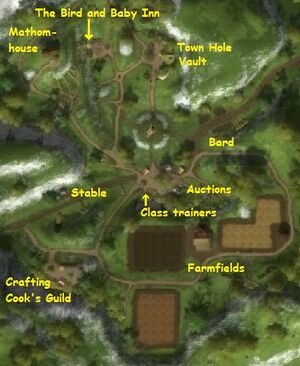 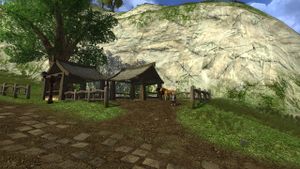 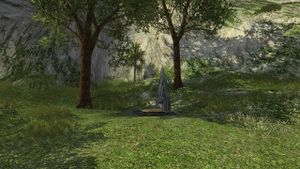 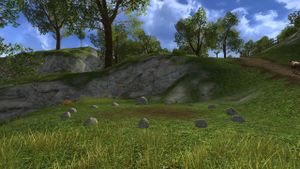 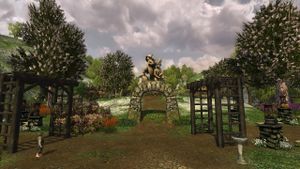 See "starting quests" and the locations for more quests
Starting:

See "list of all NPCs" within Michel Delving and its locations

Notice: Each location within this section individually lists quests, NPCs, and more, pertaining to it. 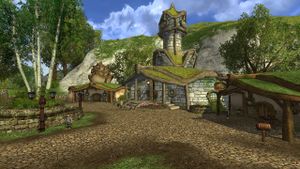 Here are the offices for the chief Shirriff, the Bounders, and the Quick Post mail service. 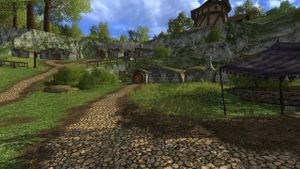 Exterior of the Auction Hall

The hall is located in the south-eastern part of the town, behind the outdoor market stalls. There visitors can buy and sell goods and equipment. 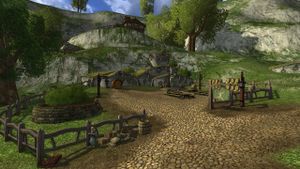 The Bird and Baby is Michel Delving's major hub of social activity, and the largest tavern in the Shire. It also offers the services of a barber and healer. This is also the home of the Inn League and Friends of the league have access to a room where they may barter for faction items. And in a back-room are some members of "The Inklings literary discussion group". 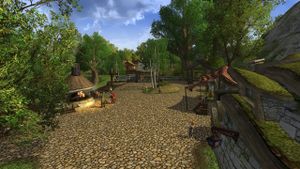 The craft-fair is located in the south-western part of the town, elevated above the market. Characters seeking a crafting vocation should speak with Blossom Proudfoot. East of the fair farmers will find the fertile soil of the South Fields. This is also the location of the Cook's Guild Hall. 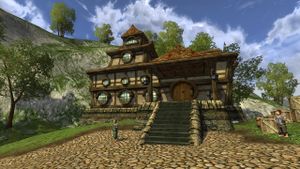 This is the Shire's museum of mathoms; anything that Hobbits had no immediate use for, but were unwilling to throw away, they called a mathom and often handed over to this house. This is also the home of the Mathom Society. 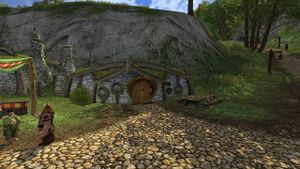 The hall is located in the south-western part of the town. Here skilled trainers from across Middle-earth offer and sell class specific quests and certain goods, recipes, and they repair worn equipment. 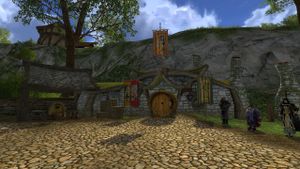 The vendor hall is found in the southern part of the town. Here customers can purchase a wide variety of cosmetic items, weapons and armour.

'Indeed, even in the hilly regions and the older villages, such as Hobbiton or Tuckborough, or in the chief township of the Shire, Michel Delving on the White Downs, there were now many houses of wood, brick, or stone...' — The Fellowship of the Ring, Prologue

The name means "large excavation" denoting the many hobbit holes dug into the surrounding hills. 'Michel' being adjusted to English from 'micel' meaning 'large'.