Defence of the Prancing Pony 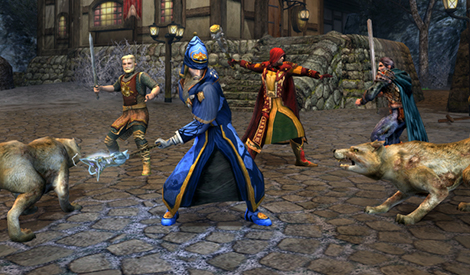 This skirmish takes place at the Pony in Bree. Skirmishes can be started by using the Instance Finder.

A shorter version is run once during the tutorial.

Second-watcher Heathstraw - Start and end of the quest, assists in defence, must survive.

Mob difficulty depends on size and level of the skirmish: Weak, Hale, Strong, and Staunch

Fight waves of assaults while keeping the Torch-bearer away from the Inn. You will get some help defending the Inn from Second-watcher Heathstraw who must survive.

Simple boss fight against Goilag in a final showdown. Remember to loot Goilag's corpse before leaving.

Remember to loot Goilag corpse before leaving. Completing the skirmish will reward Men of Bree Reputation.