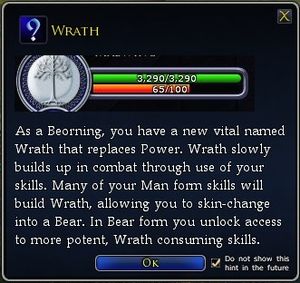 As a Beorning, you have a new vital named Wrath that replaces Power. Wrath builds up in combat through use of your skills. Many of your Man form skills will build wrath, allowing you to skin-change into a Bear. In Bear Form you unlock access to more potent, Wrath consuming skills.

Any skills requiring Wrath will list the cost in their tooltip. Bear form requires Wrath to use and maintain. Certain skills in either Man or Bear Form may also require Wrath. While in Bear form, Wrath will slowly increase over time. Wrath state is not maintained between logons so your character will always start with zero Wrath upon login.

The Beorning trait trees are designed to allow tailoring your play style to fit a tank, damage, or support role. Call on the ancestral knowledge of your people with The Roar trait line, strike down your enemies with The Claw trait line, or unleash your wrath to defend your allies with The Hide trait line. 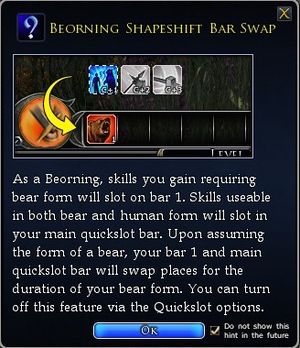 These skills are acquired by spending trait points in The Hide (blue) trait tree. You can only obtain the Set skills if you specialize in this tree.

These skills are acquired by spending trait points in The Claw (red) trait tree. You can only obtain the Set skills if you specialize in this tree.

These skills are acquired by spending trait points in The Roar (yellow) trait tree. You can only obtain the Set skills if you specialize in this tree.