From Lotro-Wiki.com
(Redirected from The Inn League)
Jump to navigation Jump to search

Originally founded by spirit-loving Hobbits, The Inn League has since opened its membership to any who enjoy the pleasures of strong drink.

The Inn League is headquartered in the Bird and Baby Inn in Michel Delving in the Shire, though there are Inn League members throughout Eriador. The Inn League rooms are only available to those of Friend reputation or better.

To achieve Acquaintance status with The Inn League, players must complete the Inn League Initiation quest series at the Party Tree, in the Shire.

Each beverage needs a different time for drinking. At every station, your hero needs 3, 5, 7, or 9 sips for a beverage. Since time is limited, you will run in time trouble if choosing the slowest beverage. The following table shows this:

Also, after finishing the first initiation quest series, several other single quests become available from Inn League Member NPCs throughout Eriador. These repeatable (once a day) single quests are timed quests that require the player to get the NPC in question a certain kind of beer, wine, or ale within an hour.

There are several quests that ask you to fetch an Inn League member a drink from far away within a time limit. It is possible to pick up the drink first, travel to the delivery location, acquire the quest, and complete it immediately. It also goes well with The Inn League Challenge. Quests can be repeated daily; after finishing a quest, selecting the Inn League member again will tell you how many hours you must wait. Each completion gives +900 reputation for the Inn League, -500 reputation for the Ale Association, and a Badge of Taste.

You can also take all 11 quests from one of the Inn League Tavern Keeps.

Total time 30-35 minutes depending on your porting abilities.

Note: Setting milestones in Aughaire and in Duillond during your first trip will make later trips faster. The milestone in Duillond also allows you to port to the elves' main festival area.

Delivery Routes for both factions

Here are some ale deliveries routes if you intend to complete both factions (Inn League and Ale Association) at once:

During the Harvest Festival, Cora Brownlock asks you to bring her a rare bottle of Bilbo's treasured wine from within the Haunted Burrow, during The Inn League Excavation.

During the Spring Festival, Tob Sandyman asks you to search for an Inn League artifact within The Maze, during The Green Challenge.

If you're playing both sides of the fence, and running quests for the Ale Association as well, you will unlock the Covert Reparations series after successfully completing An Irritating Initiation.

The Inn League deeds appear in the "Race & Social" tab of the Deed Log (Shift+L).

Increased Reputation with The Inn League (10,000) and Inn League Member title
(Note: This Quest and Deed is the prerequisite for all other Inn League quests)

There are currently no reputation barter items for the Inn League.

There are currently no mobs that give reputation with the Inn League when defeated.

There are currently no crafting quests to gain reputation with the Inn League. 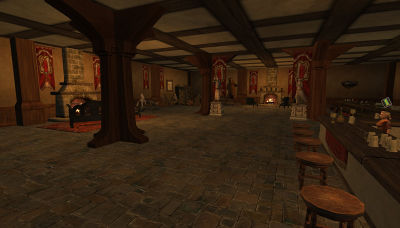 The Inn League headquarters at The Bird and Baby inn

Upon reaching Friend status with the Inn League, players can enter the Inn League room inside the Bird and Baby Inn inn at Michel Delving in the Shire and barter for special items only available from the Inn League.

There are currently no rewards for reaching Acquaintance status.