This page is about Traits for Freeps. For Traits for Creeps, see Trait (Monster Play).

One of the main ways to grow your character's capabilities in the game is by earning Traits. Each Trait may award a new skill, or it may give offensive or defensive bonuses, which may be active or passive in nature. In general, traits are earned by completing Deeds, Quests, or simply by levelling up. However, in order to gain the benefits of a Trait you have earned, you must first "equip it" (or "slot it"). This is done by using the Trait Tree Panel, which can be opened using the 'j' key, starting at Level 6. There are three categories of Traits:

Although your character can earn up to 21 different Virtue Traits, 9 Racial Traits, and a multitude of Class Traits, you may only equip a limited number of traits at one time. You can change your equipped Traits at any time, except when you are in combat. Changes are made simply by using your Trait Tree Panel, thereby allowing your choices to be fine-tuned to situations. There is no limit to the number of times you may change your equipped traits. 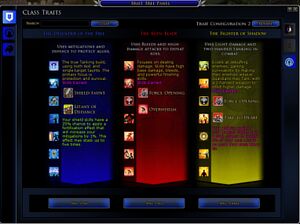 In the Trait Tree Panel, clicking on the first tab (the "banner" or "shield" icon), on the left side of the window, will expose the Class Traits panel.

You will not be able to access the Trait Tree before reaching Level 6. At Level 6, you will receive an Alert indicating "Specialization Needed". You may then open the Trait Tree Panel and select a Specialization. (The image at the right is the Trait Tree window as seen by a new F2P or Premium player.) There are three choices for each class; each with different bonuses, capabilities, strengths and weaknesses.

After selecting a specialization, the Trait Tree for your class will be shown. However, you will be unable to select any Class Traits in the tree, because you have not yet earned any Class Trait Points.

For more information about the Specializations and Class Traits available to each class, please see the class-specific page:

Each class has a choice of three different Specializations (a.k.a. "Trait Lines"), each with an associated colour and colloquially called "Blue line", "Red line", and "Yellow line". Along with the colour, the description for each Specialization gives a clue about the role or playstyle typically associated with the Specialization. However, deviations from these norms are commonplace. Players often select Class Traits from multiple Trait Lines to get some of the advantages from multiple Specializations. At high levels, characters usually have more Class Trait Points than can be spent in any individual Trait Line.

Each specialization offers a set of initial "perks" (bonuses and skills) for your character, which you receive immediately after selecting it.

In addition, each specialization has seven Set Bonuses which are earned automatically by selecting Class Traits in the tree.

You may choose a new Specialization at any time by clicking the "Re-Specialize" button at the bottom of the window and paying a nominal fee in gold. All Class Trait Points will be refunded, and you can reallocate them as desired. 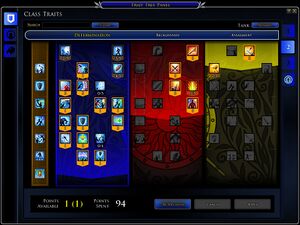 Trait tree as seen by a high-level character

After you earn Class Trait Points (see below) and select a Specialization (see above), you can spend the points in the Trait Tree to acquire Class Traits. Some Class Traits have more than one Rank. More points must be spent to achieve higher ranks for these.

As you gain Class Traits starting at the top of the tree, additional tiers of the tree will become available:

To save the changes, click the "Apply" button at the bottom. Bonuses and skills will not be applied to your character until you have done this.

To advance the rank of a Class Trait, left-click with the mouse. To remove a rank you have added but not yet saved, you may right-click.

To buy Class Traits in the Trait Tree, you must spend Class Trait Points. These may be earned by completing certain Deeds or Quests or by levelling up.

Once spent, Class Trait Points are not lost forever. 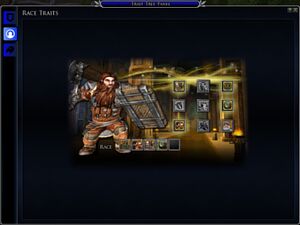 In the Trait Tree Panel, clicking on the second tab (the "circled portrait"), on the left side of the window, will expose the Racial Traits panel.

Racial Traits are unique to each race. Most require you to defeat a specified number of certain mob type. The first slot opens up at level 13, which is also when you can begin working toward your first Racial Trait. Most Racial Traits will provide your character with a special skill or fast travel ability (e.g., Return to Rivendell).

To learn more about individual Racial Traits (including how to earn them), please see the race-specific page: 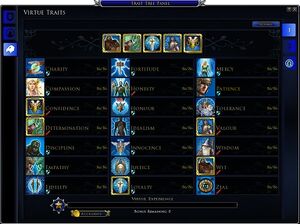 Virtue Traits as seen by a high-level player

In the Trait Tree Panel, clicking on the third tab (the "eagle head"), on the left side of the window, will expose the Virtue Traits panel.

Virtues give enhancements to all races and classes that improve the character's combat abilities (e.g., increase to power regeneration, or increase chance to evade damage). Virtues are acquired and improved by completing Deeds and some repeatable quests.

Virtues can give you a significant advantage. Your "valuation" of different virtues will change as you progress through your career. Things like resistances and seemingly "weak" gains can mean the difference between success and failure in many encounters. As such, you will wish to collect as many of them as you are able to give you the widest range of options.