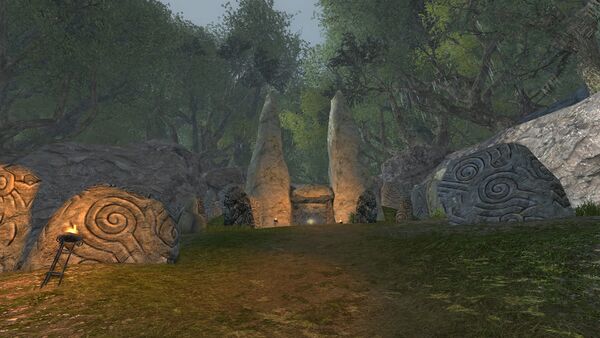 This tomb, also known as Othrongroth, is a notable dungeon located in the north-western corner of the Southern Barrow-downs.

A Camp Site Fire is found just outside the entrance, where also a small group of elves have gathered, sensing that something terrible is corrupting this tomb. Indeed so: recently the Witch-king of Angmar was here, and he re-animated many fell spirits which now threaten the relative peace of Bree-land.

The Great Barrow is an instanced dungeon. Its name is nowadays a collective name for three scalable World Instances, but here also some Epic quests are taking place. Generally speaking this location aims at Fellowships in the levels 20 to 24 and above. For historical notes, see remarks below. 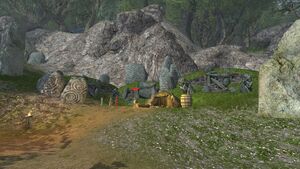 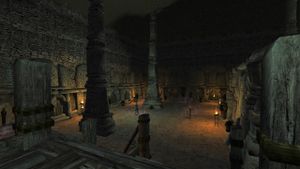 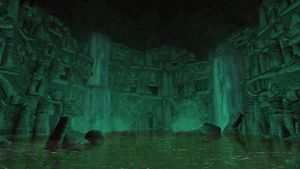 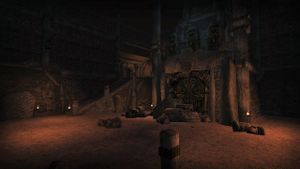 These deeds can be advanced by visiting visiting this location or defeating instance bosses:

These mobs are encountered within this location:

In the southern reaches of the Barrow-downs lies the Great Barrow, or Othrongroth, one of the oldest and largest of the Edain mounds. For many years the Dúnedain of Cardolan protected it, until a great sickness arose from the south. This plague devastated Cardolan, leaving the ancient burial-mounds vulnerable to the horrors of the Enemy.

The Witch-king of Angmar sent fell spirits from Angmar and Rhudaur to inhabit the Barrow-downs and turn them into a place of great terror. Taking possession of the rotting remains of the dead, the spirits became barrow-wights, the chief of whom sits in lordship in Othrongroth at the command of the Witch-king. As the Shadows in the East and in the North stir once again, the wights of the Great Barrow arise and stalk the Barrow-downs in service to their master. 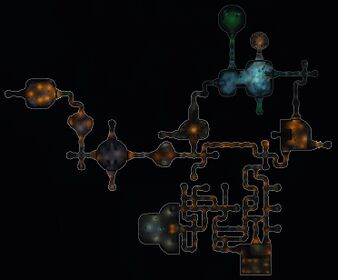 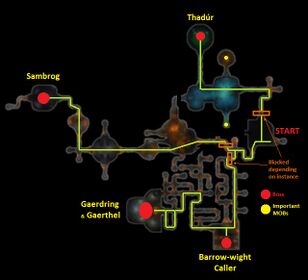 The Great Barrow, or Othrongroth, was created by the game developers as the first public dungeon instance to be visited by players. In Volume I, Book 1 of the Epic Story, a terrible assembly of the Witch-king with other evil servants of Sauron sets in motion the events that would shape Lotro.

Now "The Great Barrow" is a collective name for several smaller instances.
With the advent of Free to Play (F2P) many deeds and quests that mention Haudh Iarchith also involve this location.