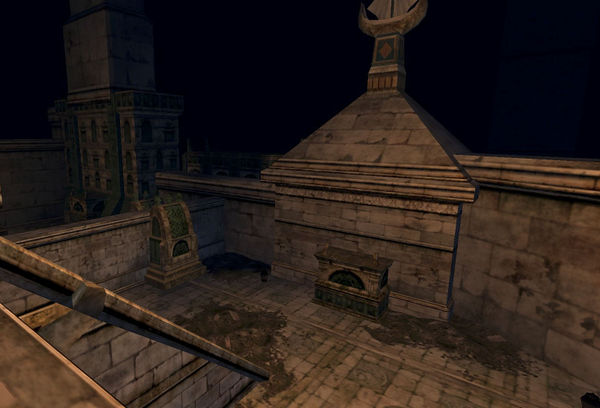 "The Lords of Umbar, sorcerers trained by Sauron, the great Necromancer, seek to bring terror to Annúminas by raising the remains of Valandil, third King of Arnor, as a terrible wight. Only the most courageous of the Free Peoples will be able to put an end to their evil deeds. . . ."

This is the tomb of Valandil, youngest son of Isildur, grandson of Elendil himself, and once the third High King of Arnor. Now this place is overrun by forces of evil.

The entrance is found down a set of stairs from northern Ariant, the great bridge to Tyl Annûn, west of Ost Elendil.

It is available in the Instance Finder. 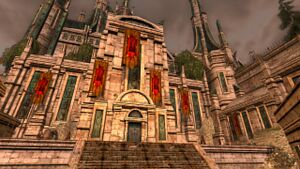 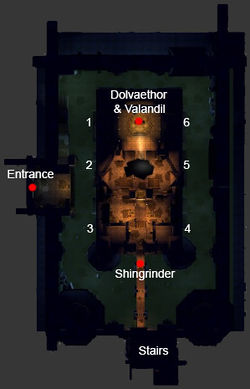 This dungeon is full of nasty fear and disease effects, Cave-claws, Kergrim, and Flashing Limrafn that will summon either three elites or an elite master if they get too close to anyone in the fellowship. It is recommended to bring a full, balanced Fellowship, and a good strategy is to deal with the Limrafn at maximum range and then lay into them, crowd-controlling them if they get too close. A Lore-master equipped with disease and wound cleansing skills is especially useful here to make things a little easier, and a Captain placed outside the instance entrance can reduce wipe recovery time considerably.

The instance is a massive underground burial hall. In the middle is a large, central structure containing six rooms, three on either side. There is a wide, watery passageway leading around the structure. Within each of the building's six rooms there are braziers which need to be lit once the room has been cleared. At the dungeon entrance and the south gate, there is a line of 6 braziers that represent your progress in clearing the lower part of the instance. Once all 6 are lit you can proceed to the upper level. Since the Evendim update, two of the braziers are already lit (random which two), and their corresponding rooms are blocked off from entry.

Begin by moving down the stairs, defeating the two patrolling Kergrim and Limrafn. There is a rare spawn, Hooktooth, who sometimes patrols around the central structure, so keep an eye out for him.

All of the rooms are pretty much the same, with an Anorian Knight who summons a group of Elite mobs, either Cave Claws, Limrafn, or Kergrim, or a combination. He has an attack that saps your blue bar very fast, watch out for it. Pulling the Knight out of the room will cause the room to reset.

Once all the braziers in all of the rooms have been lit, a gate will open in the south of the instance. At the south end of the dungeon you will reach a room filled with Flashing Limrafn. Clear a path through them and enter the southern gate. Head up a few sets of stairs, carefully killing the Limrafn on the landings, and you will encounter Shingrinder on the bridge leading to the upper section of the central structure.

Watch out for knockback on the bridge, as a fall to the floor is fatal. After Shingrinder is defeated, head across the bridge, grabbing the chest as you pass it.

There you will see Dolvaethor standing behind a fiery inferno that is blocking your path ahead and spawning single Burning Limrafn until you approach. Once you do, Dolvaethor will cause a rapidly increasing number of Burning Limrafn to spawn from the fire. Defeat them quickly or risk becoming overwhelmed. Since the Burning Limrafn have a buff that deals damage to melee as well as ranged attackers equal to the amount of damage received, DPS classes such as Champions, Hunters and Burglars will require a lot of healing. Focus damage on single targets, because AoE attacks will cause massive amounts of reflected damage at once. After the encounter, Dolvaethor will retreat farther back into the instance, and the inferno blocking your path will be gone. (Leaving the area will cause the attacking Limrafn to reset.)

As you pursue Dolvaethor, you will encounter three elite Arnorian Wights and two Fiery Morelendil Guards mobs. The guards will not engage until the wights are defeated. Once you engage the wights, they will attempt run down the stairs on either side in order to aggro up to twelve additional wights. The best approach to this encounter is to have a Minstrel and/or Burglar crowd-control two of them as the rest of the fellowship pulls the middle wight down the steps. After the wights and any adds from the side areas are defeated, the two Fiery Morelendil Guards will engage. They are not tank-able, meaning they act like an enraged mob, and they have a knock-back attack that can spread people out. Have everyone move close together to prevent them from running back and forth, then burn them down one at a time. It is best to stand in the lower corner to the left or right of the stairs, as the knock-back can cause instant defeat if it knocks you to the bottom of the dungeon. Once the two guards are defeated, clear any wights in the side rooms.

Now you can approach Dolvaethor and Valandil of Arnor, the final boss encounter. Valandil has very high mitigation against most damage types, except Westernesse damage which will damage the creature normally.

After defeating Dolvaethor and Valandil, carry Valandil's remains to his coffin, and loot the chest.