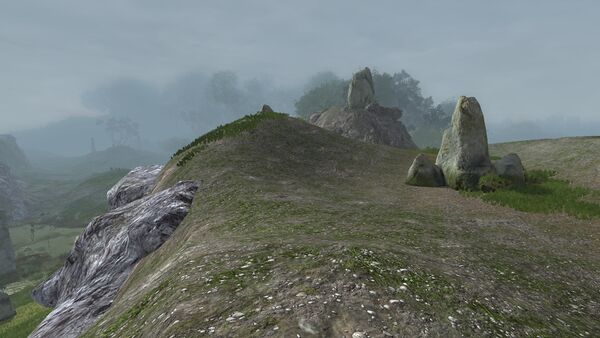 The Barrow-downs isn't properly an Area in its own right but instead refers broadly to two areas in the southern Bree-land, each with their own maps and related contents, the Northern and the Southern Barrow-downs.

These haunted areas are located in a valley found between two mountain ridges against the eastern Old Forest and the western Vale of Andrath. The two areas are similar, though the quests and creatures in the southern reaches are of a higher level than those in the north.

There are several ways of entering the valley:

The Northern Barrows Pass
Follow the road south into the valley from the Bree-fields. [29S, 55W]
The road is found half way between Bree and Adso's Camp, south of some ruins along the main-way.
The Old Barrows Road
Begins at Tom Bombadil's House in the Old Forest and leading north, past a camp with stranded Bree-folk.
The Dead Man's Perch
While the Perch itself isn't directly accessible from the Southern Bree-fields, a short ways south the hills are low enough to climb up and make your way to either the Northern or Southern Barrow-downs, the northern option taking you right past Dead Man's Perch. [32.9S, 53.2W]
A semi-secret crypt
Known only by a few, this crypt leads through ridge between Andrath and Southern Barrow-downs, guarded by some wights.
Andrath [34.9S, 53.1W] ↔ [35.0S, 53.7W] Southern Barrow-downs

There are three major hubs in the Barrow-downs:

There are two large areas in the Barrow-downs, each with their own contents and adventures:

The Barrow-downs is named "Tyrn Gorthad" in Sindarin, from "torn" for "burial mound" and "gorthad" for "of buried". The Race of Man inhabited these hills already during the First Age and until the end of the Second Age when Dúnedain from Númenor arrived. With Elendil these hills and monoliths came under the reign of Arnor, until the kingdom was divided among the sons of Eärendur in 861 of the Third Age and the barrows part of Cardolan.

Much later, in T.A. 1409, the last of the Dúnedain of Cardolan were driven into the Barrow-downs and the Old Forest by the forces of the Witch-king out of Angmar. Though the Last Prince of Cardolan was killed, the people of Cardolan remained in and near the Barrow-downs for another two hundred years, until they fell victim to the Great Plague (Lhaereth's creation) that devastated much of Middle-earth. Afterwards, the Witch-king sent fell-spirits to the Barrows to raise the Barrow-wights that haunted the area and gave it a dark reputation among the Bree-folk for many years.

More recently, in T.A. 3018, the Barrow-wights were stirred by the Witch-king himself. Soon after, on September 28, III 3018, the unarmed Frodo and his fellowship were trapped by a barrow-wight near the cairn of the Last Prince of Cardolan. Luckily Tom Bombadil heard his cry, came to their rescue, and gave them swords for protection.