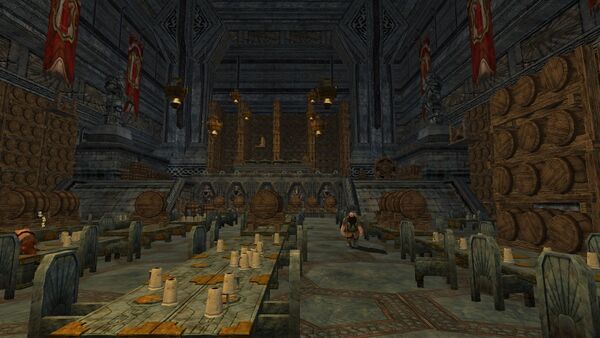 During festivals this ale loving club is bubbling and boiling with activities, whereof a considerable amount are aimed at undermining the Inn League's wild success. However, these usually noble dwarves of Thorin's Hall also provides some attractive rewards for visitors who manage to wind themselves through the quests and gain reputation *hic*

Founded by a furious Dwarf. The Ale Association feels deeply offended that the Inn League has had such wild success despite the lack of influence from the Dwarves.

Gaining membership to the Ale Association

Players must complete The Ale Association Challenge quest series, which is given by Andri in Thorin's Hall Inn, who directs you to speak with Bjarni at the Prancing Pony in Bree.

The quests are timed with minimal seconds to spare. See "Tips and Tricks: Ale Association Challenge" for helpful information.

You do not start with Andri in Thorin's Hall Inn. Rather, you start directly with The Ale Association Challenge: The Prancing Pony.

Only the quest "Jónar's Special Delivery" is timed (30 minutes).

After you complete Jónar's "spoiler" quests chain once, Jónar offers all quests simultaneously for repeat runs. You can accept Tainted Mug, An Irritating Initiation, The Draught Drought, and Jónar's Special Brew at the same time. The quest arrow on the minimap conveniently leads you from destination to destination.

Ale Association Tavern Keeps are helping Jónar ruin the Inn League. They want you to fetch an Inn League member a drink from far away within a time limit - but not the drink they want. Instead, you're to procure something completely unlike what they want, and disguise it as their desired beverage.

Unlike Inn League quests you must first get the quest from an Ale Association Tavern Keep, then travel to the pickup location and obtain the item (you do not have to purchase it), and finally travel to the delivery location. You are given an hour (60 minutes) to complete each quest. Each completion gives +900 reputation for the Ale Association, -500 reputation for the Inn League, and a Badge of Dishonour.

The delivery quests can be repeated daily; after finishing a quest, selecting the Ale Association Tavern Keep again will tell you how many hours you must wait.

During the Harvest Festival, you can speak with Ráthgeir near the Haunted Burrow, who will give you a quest to scare several hobbits who are lost in the burrow.

Guide on how to perform all the Ale Association delivery quests in one hour.

Here are some ale deliveries guides for the ale association (which turns out to be the same as doing them for both factions):

Combined Deliveries for Both Factions

Because the NPC where you complete each Ale Association delivery quest is also the one where you both pick up and complete each Inn League delivery question, you can do both at the same time. This route is based upon Rhanti's F2P Delivery Guide, with some updates due to changes in swift travel routes in recent years.

You should have port skills (Return to, Guide to, or Muster in) or milestones for the following locations:

You must have room to accept all 11 Ale Association quests. You must also have each of the following in your inventory:

At each NPC where you are delivering drinks you will:

Receive the title The Sinister (Be careful -- you are starting to take after a certain sinister, hobbit-hating dwarf.)

You may also trade in Badges of Dishonour for festival tokens from Lar.

Receive the title Abuser of Amusement (You are not on a very good path.)

Receive the title The Great Saboteur (Did you know that you're not very nice?)

Receive the title Creep (In reaching kindred status with the Ale Association, you have demonstrated that you definitely play for the wrong side.)

You may also trade in Badges of Dishonour for the following items from Gapi.