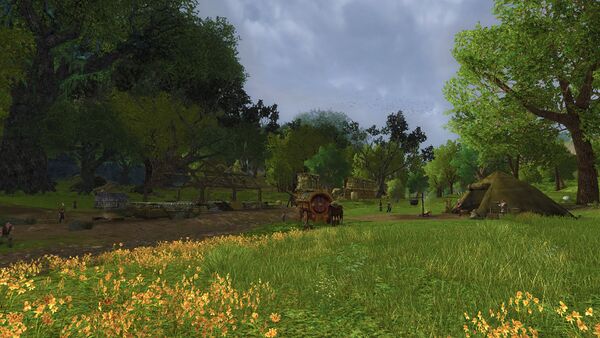 Adso's Camp is a settlement located within the area of Southern Bree-fields, in Bree-land. [29.1S, 56.8W]

Athwart the Great East Road and about half-way between Bree and the Brandywine Bridge a driven hobbit named Adso has set up a merchants camp for the weary travellers. This is also the place for his growing trading business ... growing if he could get some help to repel the prowling brigands and outlaws.

Many adventurers use the camp as a base for exploring the Old Forest just to the south, and hunters gather for the varied wildlife along the edge of the wood or at the grassy fields along the camp. Yet others lend a helping hand to the struggling residents at the camp.

Adso's Camp hosts vendors, a stable-master, and campfires for cooks. This is a nice traveller's stop. 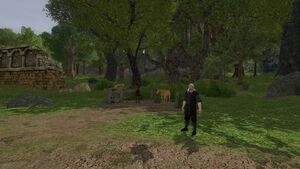 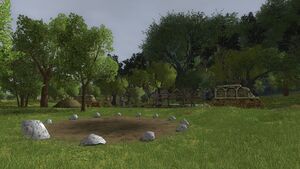 Adso Haybank long desired to open an inn. After hearing tales of Big Folk coming up the Greenway in great numbers, Adso came up with an idea: he would open a hunting lodge on the Great East Road! ... Having a hard time with financing, he was forced to seek aid from his friends, one of which was Barliman Butterbur, proprietor of The Prancing Pony of Bree. With a substandard work-force, and debt to Bill Ferny, a friend of Sharkey, one of the brigands, he is trying to get his dream finished.