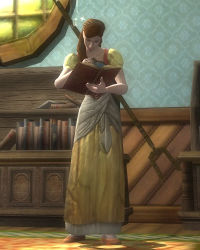 "Perhaps the most mysterious of the professions, the Scholar collects fragments of lost lore and attempts to interpret their secrets. By doing so, he can create scrolls for other craftsmen to read and improve their chances of producing a superior product. Other practical applications include lore by which specific enemies (orcs, trolls, the dead) might be best combated, dyes, and cures for various maladies."

Scholars can produce a wide variety of scrolls, potions, dyes, and other useful items. Most materials that a scholar uses tend to show up as treasure from humanoid foes. Materials can also be obtained from artifacts, typically found near ancient ruins using the Track Artifacts skill.

Some dye ingredients used by Scholars are crafted by the Farmer. Since the Scholar profession is only available in the Historian vocation, which also includes the Farming profession, the Scholar can simply switch to farming and harvest the required ingredients.

A guide to attaining Scholar Mastery

A list of all component items that are used to craft Scholar recipes: Scholar Components

A Scholar requires a Scholar's Glass in order to study relics, texts, carvings and trinkets from days gone by. The Scholar can find these items by using the Track Artifacts skill, which directs him to the nearest Artifact in the world around him. Once he has studied the Artifact sufficiently, the scholar may then combine the knowledge he has gained with components purchased from a Novice or Expert Scholar vendor, to craft a new, useful item. A number of advanced recipes requires Crafting Rare Components.

Resources are generally "Nodes" found across the lands of Middle-earth, which provide crafting materials in Crafting Recipes.

Artifacts can only be harvested by characters with the Scholar profession. Scholars are granted the ability to Track Artifacts, study the artifact using Crafting Tools, and process the ore into ingots at a Forge.

Each artifact node yields a small number of texts and trinkets and a small chance of other crafting materials such as rare components and mastery components.

The following Professions can use these texts and materials in their own crafting recipes:

Scholars can also find crops using the Track Crops skill. Some of these crops may be cultivated by Farmers using Vegetable Farmland; others can only be found in the wild.* They are used by Scholars to craft Dyes and Wall Paints.

When crafting dyes, a Scholar may also use non-plant dye ingredients. These ingredients may be found in Ore nodes, which can only be mined by players with the Prospector profession. Since neither of the scholarly vocations includes Prospecting, the Scholar must acquire the following ingredients from other players (in trade or through the Auction House). The items can drop as loot (more commonly in chests and backpacks than from mobs), but this is extremely rare.

A complete list of Scholar recipe indexes by tier:

An index of items that can be crafted using Scholar recipes

An index of wall paint including those crafted using Scholar recipes

Crafting Guilds are Reputation factions that grant advantages in recipe execution. Reputation is increased by bartering special crafted items. Membership in a Crafting Guild used to be exclusive but as of Update 25 you can be a member of 2 crafting guilds.[1]

Scholars of all levels are eligible to join a Scholar's Guild, but the guild recipes require Expert tier and above. To join a crafting guild one must first speak to a Master of Crafting Guilds who are found at many locations. Then continue the quest by travelling either to Rivendell to speak with Guild Leader Ethel Applegarth, or to Minas Tirith (see note below). In Rivendell, the Scholar's Guild-hall is located at the southern wing of the first floor, in the Last Homely House.

NOTE: Characters who actively do both Scholar and Weaponsmith may find the House of Craft in Minas Tirith preferable over the Last Homely House because there are guilds for both professions. It is available to characters of all levels. However, the guild introduction quests are turned in to a NPC who does not reside there.