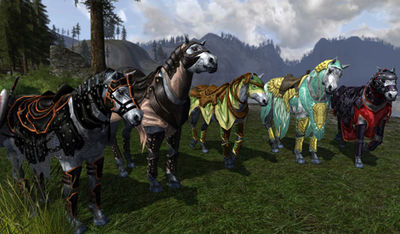 Mounts allow players to travel more rapidly than on foot through the lands of Middle-earth. Types of mounts available include steeds, goats, elks, boars and war-steeds. For steeds and war-steeds, Elves and Men ride horses, while Hobbits and Dwarves ride ponies. All races can ride goats, elks and boars.

Mounts can be ridden in most locations in Middle-earth without restrictions, however, only Goats and Boars can be ridden in Moria and many areas of Gundabad, and many interior areas do not allow mounts, automatically dismounting you upon entrance. And while mounts can't swim, you will be automatically dismounted if you enter a body of water where your mount must swim! 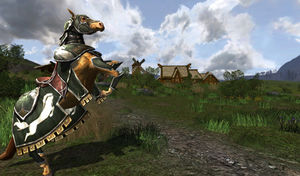 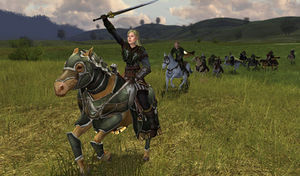 Note: Your War-steed's Endurance and Power can be modified through the application of Traits.

VIP players can purchase the Bree Starter Steed from Éogar, son of Hadorgar, for 200

, before discounts. This is a slower version of a normal mount (+32% movement speed) and has less health, but does not require the Riding Skill to use. Like other mounts sold by Éogar, the price of this mount can be reduced by as much as 65% (to 70

), but only by first buying a 500-silver mount from Éogar (which requires Riding Skill), to get the Mount Discount, and possessing a vendor discount from Men of Bree (Acquaintance standing). Thus, the full cost-saving is likely to only be realized by mount collectors seeking to complete their set.