Conflict in the Ettenmoors:
A storm gathers in the land between Angmar and Rivendell. The forces of Darkness amass at the foot of Mount Gram whilst the free people of Middle-earth gather to fight back the spreading shadow of the north.

Monster Play. Often spoken of in hushed and fearful tones over a pint of ale, some believe the stories, while other stalwarts consider them simply fireside tales told to frighten wide-eyed young hobbits. Now you'll learn the truth!

What is Monster Play?

LOTRO offers a unique form of player vs. player combat known as Monster Play. Players are transported to the Ettenmoors, a consensual PvMP (Player vs. Monster Player) region about the size of the Shire. Here, the Free Peoples and the Forces of Angmar are in constant active conflict, and players can choose to join the fight as either their normal player character (at level 20 and above), or as one of the servants of the Enemy!

Playing as a Monster

Before you are able to play Monster Play, you have to create a free player and attain at least level 10.

After that, a "Monster Play" button will be active on the character select screen after login.

In Monster Play, you have one slot for each class available to play. The available classes are: Orc Reaver, Orc Defiler, Spider Weaver, Uruk Blackarrow, Uruk Warleader, or Warg Stalker (all of which start as level 140 monsters). Once created, each monster character will persist and be available for further play, unless you choose to reset it.

Monsters are named when you create them, and can receive surnames from an NPC in Gramsfoot. You can also form monster kinships, called "Tribes", similar to the Free Peoples.

Monsters can trade with other monsters, and they have Mailboxes. They cannot use tools, armour, jewellery or other wearable items, but they can use potions, food and some charms. They can loot defeated mobs, accumulate money and also sell spare loot to Quartermaster NPCs. Monsters can accept Quests and are usually rewarded with Infamy and Commendations (replaced Destiny Points) for completing them. They also receive Infamy and Commendations for each player defeated.

For full details on playing as a Monster Player, please see Army of Angmar.

Playing for the Free Peoples 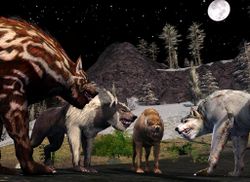 Prior to the release of The Lord of the Rings Online: Riders of Rohan, player characters were eligible to participate in PvMP in the Ettenmoors at level 40. With the release of Update 13, level 20 is the new minimum requirement.

Travel to the Moors

Note that entry for the Ettenmoors will be grayed out until level 20.

Recruiters for the Free Peoples

Once you reach level 20, you will find four recruiters with a quest for you: A Plea from Lainedhel. (All four offer the same quest).

There's plenty to do in the Ettenmoors, and your actions will often earn you Commendations and Infamy or Renown (see below). Take on solo quests or head out with a group of friends, looking for (and finding!) trouble. Besides the smaller-scale battles you'll find yourself fighting in while exploring the Ettenmoors, you can also engage in pitched battles for the control of various points of conflict. A dynamic map-note displays a flag - red for monster players and blue for Free Peoples - at these key locations to show which faction currently controls them. Fearsome enemies or allies may await you within contested strongholds (depending on which side currently holds them), and you would be well advised to attack one of these locations only with a large force - but be on your guard! PvMP players might be defending their location, or attacking yours while you're gone!

There are a host of buffs and bonuses success provides, for a complete list see: Category:Monster Play Effects

Here is a short summary. 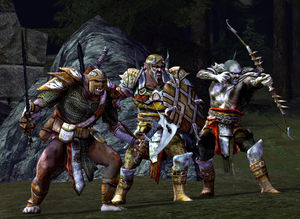 As if ravaging Hobbit villages as an Orc and sending their furry little feet fleeing in terror weren't reward enough, there are other incentives for participating in Monster Play. In this section, we'll talk about the basic aspects of advancement. The rank, rating, renown/infamy and other information about your participation and advancement appears on The War page of your Character Journal.

Rank is a reflection of your standing and service to the Free Peoples as a player character, and the favour earned in service to Angmar's army as a monster. Each type of character, monster or Free Peoples, can earn up to 15 ranks.

Renown (for Free Peoples) and Infamy (for monsters) are similar to experience. Each time you defeat an enemy, whether solo, in a fellowship or in a raid, you earn an amount of Renown or Infamy based on the rating and rank of the defeated foe versus your rating and rank and the amount of damage you and/or your fellowship/raid members dealt to your target. You can also earn them by doing quests in the Ettenmoors. Earned points are never lost, and continue to drive you closer to ever higher ranks.

Rating is a fluctuating number that rises and falls based on your victories and defeats in player vs. monster player combat (PvMP). The amount of rating points earned or lost depends on your rating and the rating of your opponent or opponents. A higher rating grants bonus Renown/Infamy from PvMP victories.

Prestige used to be a visual representation of your PvMP rating, appearing as a collection of stars surrounding your player portrait. For every 0.100 Rating above 1.000, you would gain half a star, adding up to a maximum of 5 stars at 2.000. This mechanic has been removed as it caused "star-hugging": players would avoid fights because they were afraid of losing their stars, thereby killing the action. You can now only see your own rating, shown at The War page of your Character Journal.

Perks are short-term buffs which benefit your normal player characters, and can be used to boost your strength, increase your speed, and even give you rested experience points. They were earned with Destiny Points gained through Monster Play and levelling up, and can be purchased via your Destiny Point Wallet after level 10. The ability to spend the destiny points you earned is still available, but as of Update 6 players are unable to earn them through Monster Play, only through levelling up.
Note: Only VIP players can use destiny perks.

We hope this overview has whetted your appetite for a taste of LOTRO's Monster Play, and provided the information you need to join the fight. Happy hunting!