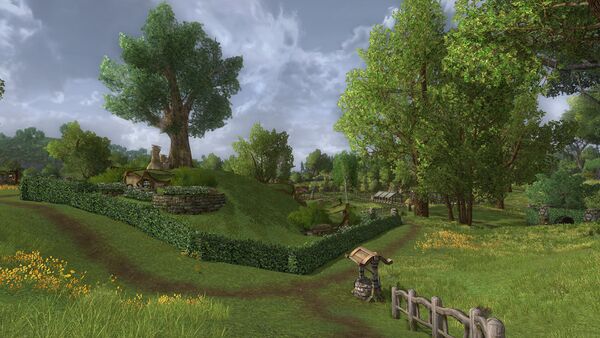 The small village of Crickhollow is maybe most famous for one of its dwellings, the house that was bought for Frodo Baggins as an excuse for him to leave Bag End and the Shire behind and begin his quest towards Mordor. However, Crickhollow is a small village in the centre of today's Buckland (in the north-east of Buckland proper). The weary traveller will find a place to rest, but also armour and weapons vendors; a Supplier and Provisioner is found at Buckland's Craft-faire, south of Brandy Hall. 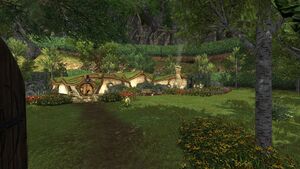 Founded no earlier than III 2340, the year of the first settlement in Buckland.
Meaning: Crick- was obscure even to the hobbits but could possibly mean hilly (and the area around Crickhollow indeed hilly), -hollow indicates a small depression.

"In Buckland, not far to the north of Brandy Hall in the hills rising away from the path of the Brandywine, travelers will come upon Crickhollow, an often-visited retreat for those Hobbits who wish to spend a few days away from their daily routine, or simply rest and eat more peacefully than they are used to resting and eating at home. Those who live near Crickhollow are pleasant enough folk, though generally they like to be left alone to their peace and quiet.

"Many of the old-timers in the area tell stories of travelers who have ventured beyond the High Hay and into the Old Forest beyond, many of whom never returned to tell the conclusion of their tales. In these days of the growing darkness in the north, many indeed have been the strangers who have ridden into the region to ask questions, though none can, or will, say what specifically these dark figures pursue.

"Crickhollow plays a significant role early in the journey of Frodo Baggins and his companions in The Lord of the Rings. It is here that Frodo buys his house after leaving Bag End, not with the intention to stay in Crickhollow, but with the goal of diverting would-be pursuers from his trail. Adventurers familiar with the tale will no doubt want to seek out Frodo's home, though the locals may tell the travelers that, although the home of Mr. Baggins is filled with his many possessions, he has not been seen in these parts since the day he first arrived. Most doubt he has closed himself in his new residence and believe he has gone off on some personal quest, perhaps to locate his old uncle Bilbo who disappeared so many years ago." — lorebook 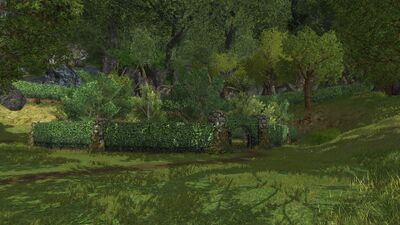 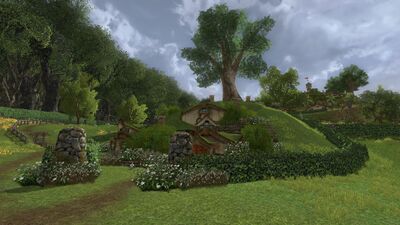 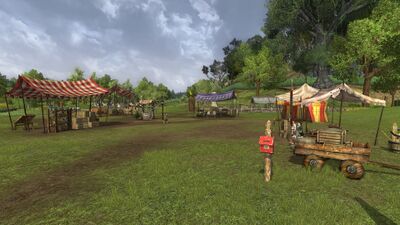