This page is about the world instance. For the area in Angmar, see Carn Dûm. 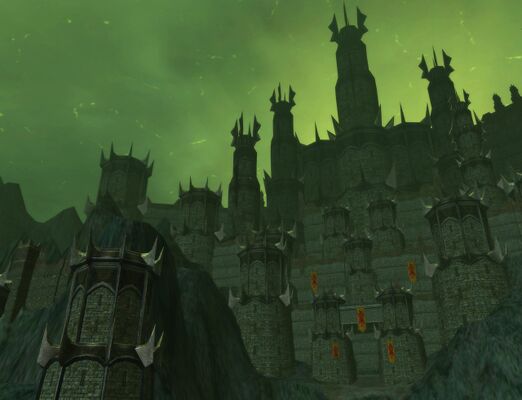 This instance is designed for a Fellowship of level 50 characters.
It is available in the Instance Finder.

Part one: Champions of Carn Dum

The instance begins with you being able to go 2 ways. You can go left or straight. Going straight leads to a gate, and unless you have the corresponding key, is a dead end. Clear out the area if you wish. Going left will lead you down into the pits of Carn Dûm. Avoid the green water as it appears to be sewage. You will soon be at the Slave-pens. Opening the huts will have you be attacked by enemies (usually pale-folk).

Going directly north from the first hut will eventually lead you to where you want to go. Taking side paths is optional for slaying deeds, and quests if all of your fellowship has the free slaves quest. Eventually you will reach a cave with an Iron grate.

Head east from here, up the ramp. Fighting your way through Uruks and pale folk, you will find yourself at Urro, the first boss of the instance. Clear out the area, and then fight him. He should be no problem, just kill him, and keep the adds under control. Now go into the cave. You will encounter some slugs. However, when you get before the railing bridge, stop.

You will be ambushed by pale-folk horn blowers, that summon alerted warriors who are elite. 1 of these is easy enough to deal with, 23 are not. Stun casting pale folk as much as possible, or use clobber, or stamp. Some horn blowers may get away with a cast or 2. Have a tank for the elites, and the rest of the fellowship, besides the healer, focus on the priority of preventing pale folk from casting. When you are down to the elites (if you have survived the gauntlet) blast them as well.

Now continue along. Through the cave you will find one passage that leads north, and another that leads east. The northern pass is guarded by an ornate grate similar to the ornate grate at the front entrance.

Go east, as it is your only way to proceed without the keys. You will now be in a troll area. At first you can go east or west. East is another dead end, so unless you are slaying, go west. Now you will be heading along a trail. Side paths are dead ends, and you can see that they are just by looking at them.

Eventually you will encounter the same hill that Tármunn Súrsa is located on. Here you can go on the hill and go left, or go around the hill. Either choice is fine. Afterwards, you will see a Gorthorog Guardian.

Once defeated it will trigger Barashal to call out: "Destroy the bridges to proceed! Stop them at all costs!" Relax, you have plenty of time. Follow the trail of Gertheryg to Barashal. Barashal likes to knock people off bridges. Make sure that you are facing directly in front of or behind him, or far away from him. He gives off dread, and attempts to heal.

He drops the Ornate Grate Key.

Go back into the tunnel after Urro and use the Ornate Grate Key (you need to consume it first so it is added to your key ring) then open the Ornate Gate; take the north passage.

Next, after a short walk, you will be in the cave of Helchgam. You have to defeat giant slugs here, but they are slow and should be no problem. You can go north or straight here.

Straight leads directly to the Helchgam pool while north leads to a bunch of merrevail on the cliffs surrounding the pool. At the end of the cliffs you will find yourself on the other side of the cave. There is a little slide on the right edge of the far side of the cliff where you can avoid falling injuries if your careful, and you are also in position to skip the Helchgam fight.

If you avoided the cliffs then you will find yourself forced to do the Helchgam fight as the door locks if you beat the 3 groups of tentacles you need to fight around the pool. After defeating the 3 tentacle groups (with 2 elite tentacles per group) Helchgam will become aggravated, and will pull a pillar down, and remove a platform. Then 2 groups will surround the pillars still standing.

Helchgam will also join in by shooting things at you. After defeating the 4 tentacles surrounding each pillar, Helchgam will pull it down. At that point melee classes can attack him. Reduce Helchgam's morale to about 38,000, then the melee classes should retreat to the shore and let ranged classes deal with the last 2,000 health. Once at 36,000 Helchgam pulls the pillar down into the goop. All people must be off the pillar by the time he does that, or else they will fall off and perish. It is relatively easy for ranged classes to tell when the pillar is falling. Melee classes use your better judgement of when it is at about 2/3, and 1/3, and depart from the combat early to prevent unnecessary death (note that Helchgam can root). If you manage to survive the first fourth you should be able to survive the next, granted nobody rush in when the Fellowship isn't ready. After Helchgam is defeated, go to the far side of the cave.

It is a shortcut once you have found the key. Make a left turn from that and head into the ruins. You will climb up a tower. At the floor second from the top you will find yourself with only one pale folk. Go into the first side room on the right and attack the pale folk there. The Angmarim should join in the battle. Now go to the side room on the left and do the same. Now you are ready for Salvakh.

If you had not defeated the Angmarim in the side rooms, then they would have become adds. Salvakh is no problem for a full group, if the others have been defeated. After defeating him a gate will open to reveal a door. Step out of this door. Go north, and fight your way, but be careful to look up. Merrevail hang on the ceilings in groups of three. After climbing up the hill Azgoth's shrine will come into view, but clear out the area first. Now defeat Azgoth.

Unless you are slow the merrevail won't all attack. Azgoth drops the iron grate key, which can be used to open up the gate by the first cave.

Now go back to the tower, and head south. This is the Duvardain Quarter, with surprisingly hosts no duvardain. Only full fledged Angmarim, and Gertheryg are here. After making your way you will find some hill-women, and Gertheryg fighting. When you get close the Gertheryg will knock them off the cliff to their alleged doom, and turn around to fight you.

Erscin([11.8N, 34.4W]) appears to be the only survivor of the fight besides you. If someone has a quest to save Erscin, and then clicks continue quest, then a bunch of sleeping Gertheryg will spawn. Take care to follow Erscin, and avoid the Gertheryg. After he makes it back to the tower you can kill the Gertheryg.

Now go straight but don't attack Avalgaith just yet. Clear out the area first. Don't attack Avalgaith still. Have someone approach Avalgaith, and run back. Don't attack Avalgaith. Now he will have his healers make him invincible, and just sit there. If a healer is attacked she will go into battle mode, and summon a bunch of pale folk. There is nothing you can do to stop the pale folk from being summoned. Have someone shoot a healer with their bow, or use a spell. Now the healer comes. Kill her, and move on to the next. Take them one at a time. After they are all gone Avalgaith is attack-able. He is easy after that. Just don't send a Champion in there doing a big AoE while the healers are around, or it will create a juggernaut that is really hard to beat.

After the wraith is defeated the gate behind him will open. It is a small gate. Squeeze through and travel through the new area. Head south. You will encounter a Cargûl here as well as regular mobs. After that you will find two Gertheryg guarding the entrance to the main street. After you are on the main street you may clear out the area back to the instance entrance.

Now head north, and you will find yourself at Tarlakh. Have your light-armour classes approach him while the rest of the fellowship stays behind. Once Tarlakh is approached 3 waves of Angmarim will spawn, one after another. After defeating the second wave, start backing up into the light armour classes. After the third wave is defeated Tarlakh will attack. By himself he is no problem. Now all that is left is the castle!

The next room has merrevail and Mormoz hanging from a chandelier. The merrevail will activate one at a time, and run to a side room to gather bats. If you are attacking Mormoz heavily, then only 1 or 2 should leave the chandelier.

In the next room Rodakhan is sleeping in the centre. Clear the area out first before waking her, or everything in the room will attack you at once. Once you have beaten her to near defeat she will collapse. Múra will then open the locked door, and heal her. Burn Múra first and then move on to Rodakhan.

In the next room Gúrthul lies in wait. He will split into 6 forms, each form calling out a class. They will attack one at a time, and then attempt to stun, or otherwise disable that class. The only time this is a real problem is if your healer is disabled. If so, use an off-tank, such as a Champion, or extra Warden or Guardian. Use force attacks, and timely aggro swaps, to keep them both alive. The tank can also kite while ranged DPS take it out.

After defeating all of Gúrthul's forms, the door will open. You will find yourself in a hallway. On one end is the Witch King's Watch (deed), and on the other is his throne behind a locked door.

Go to the door just next to the Witch King's Watch. Wait for your whole fellowship to be with you. Now open it, and begin. The first set of doors are Angmarim. The next are bats and merrevail, and the last trolls and a Cargûl.

After defeating the Cargûl, the Witch king's throne door will unlock, and you can step inside. Step onto the platform, and prepare yourself. This includes a balanced meal, an Edhelharn token, and a tome. Have the leader perform a ready check, and then have someone approach the throne. Mordirith will come out. This battle takes a while. There are some things you need to watch out for.

The reason to emphasize NEAR the centre is because there is a giant eye of Sauron that appears there during the end of the fight...
You will probably run out of power... This sucks... It is the Minstrels that will really need power or else people will start dying. Use power pots.... try to kill him before he kills you.

To be more exact check the Mordirith page. He is the last boss, and after having defeated him -- victory!

There are 15 raid locks in Carn Dûm, activated after defeating the following: