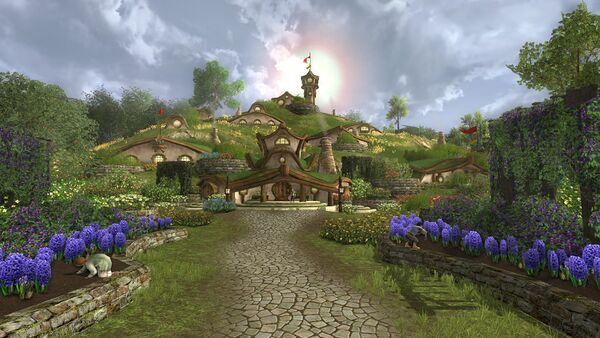 On the eastern banks of Brandywine River and in the centre of Buckland proper, the Brandy Hall is a focal point of interest—and of sight as the "Buck Hill" raises high above the neighbourhood. It is commonly understood that the smials of Brandy Hills count among the largest, well a par with the Great Smials.

However, even more interesting, here Frodo Baggins grew up after his parents' tragic drowning accident. Visitors now find its owner Saradoc Brandybuck at the porch, the father of young Meriadoc (Merry) who at the moment is on a quest together with Frodo somewhere eastwards. 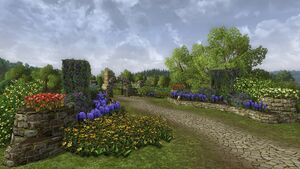 The planters outside the hall 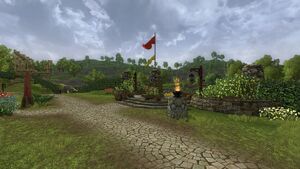 Milestone just down the road from Brandy Hill

Founded in III 2340, or shortly thereafter.
Built by Gorhendad Oldbuck after his foundation of Buckland.
Expanded by Gormadoc 'Deepdelver' Brandybuck from approximately III 2800.
Meaning: 'Brandy' is probably from Branda, meaning 'border', which would give the 'hall on, or across, the border' (of the Shire, that is).

"For nearly 700 years, the warm light from the many windows of Brandy Hall has welcomed visitors crossing the Brandywine River from the west into Buckland. Originally delved and built by Gorhendad Oldbuck, the first Master of the Hall (as the head of the Brandybuck family is called), and greatly expanded over generations, the ancestral home of the Brandybuck family is now formed of many tunnels and rooms occupying the entirety of Buck Hill on the eastern banks of the Brandywine. Brandy Hall has no less than three main entrance doors and over a hundred windows, making it one of the grandest mansions in the entire Shire. Long before the forming of the Fellowship of the Ring, Frodo Baggins, orphaned as a young Hobbit, called Brandy Hall home for many years, before he went to live with Old Bilbo Baggins at Bag End in Hobbiton. Merry Brandybuck, Frodo's cousin and also one of the Nine who set off with the One Ring toward Mordor, also once called this great mansion his home.

"But not only is Brandy Hall the home of many generations of Brandybucks, along with cousins, and indeed hundreds of relatives, the halls also house a significant number of books recording the history of the Shire. This library would expand significantly after Merry Brandybuck returned to Brandy Hall and became Master of the Buckland himself... but these are tales for another telling.

"Although the majority of Brandy Hall is built underground, a significant amount of building in and around Buck Hill is visible from a great distance. Indeed, the entirety of the village of Bucklebury has been built along the hills and banks surrounding the hall. At Brandy Hall in the village center, many generations of expansion have converted the large, low hill into an impressive dwelling and important social center for Buckland. Travelers to the region will no doubt want to take a moment to share a tale and trade wares with the good Hobbits of Buckland before venturing into the mysterious darkness of the Old Forest, just beyond the village's protective hedge, the High Hay, to the east." — lorebook