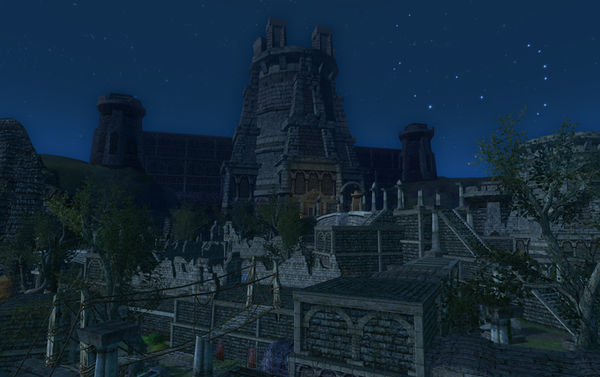 This is the second of four World Instances within Fornost. Access is granted after completing the deed Fornost -- The Gate to Earth (defeating Megoriath in the Wraith of Water instance). Within this instance, defeating Rhavameldir completes the deed Fornost -- The Gate to Fire and opens the way to Fornost: Wraith of Fire and, beyond that, the fourth instance (Fornost: Wraith of Shadow).

Find and defeat Warchief Búrzghâsh, then Gurkâmâb. Find the "second tower", Barad Harn, and fight your way up to finally defeat Rhavameldir, who drops a second morgul hilt.

All quests are for Fellowships
Starting:

The very beginning of the instance is a boss fight. Go into the room and encounter Warchief Búrzghâsh. Make general boss preparations for this, and then approach him. He will summon adds.

After that you will head into the troll area. The adds should be no problem. Proceed through the area till you see one goblin in a gate, he will run back to get help from more trolls.

After dealing with Gurkâmâb & Co. continue through till you get to Barad Harn. Clear out all the adds you can reach, and then flip the switch. This will unlock the room to the left of the entrance. Kill the trolls here, and move on to the room across from it. After that the gate on the far side from the entrance will unlock. Proceed through and climb up the stairs to the next level.

Fight your way to the stairs, and climb up to the third level. Here you will encounter Rhavameldir. He will summon adds and one troll. Kill the adds first and then move on to the boss. Eventually all will go down, and you can get your loot, and proceed out of the exit to the west.