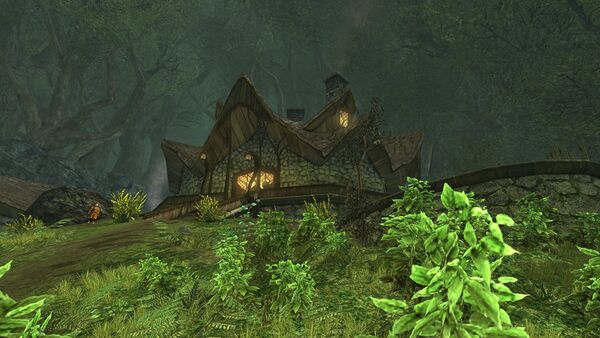 Tom Bombadil's house is located in the east of the Old Forest, founded at a shelf in the mountain ridge against the Barrow-downs. Just south of and above Tom's house the Withywindle river springs forth, adding to the beauty and watering Tom and Goldberry's gardens. This house is indeed a joy to behold and the ambient music is soothing any weary visitor, and Tom himself will guide and help through tasks, if just somebody helps him gather some water-lilies.

There is no simple path to Tom's house, however one is quicker than others: from north-east via Northern Barrow-downs and the Old Barrows Road. Any other way will use the winding paths through the Old Forest, the creatures are perhaps less frightening but many are those who are wandering endlessly in circles, or if they end up inside the Old Man Willow.

Not long ago, at September 26, III 3018, Frodo and his fellowship was invited here after Tom had rescued them from the Old Man Willow just west of here. They stayed for two nights before continuing into the barrows. 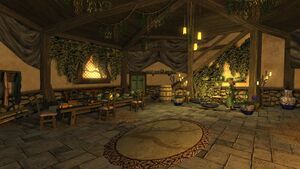 "(...) and there, still high above them on a further slope, they saw the twinkling lights of a house. Down again the path went, and then up again, up a long smooth hillside of turf, towards the light. Suddenly a wide yellow beam flowed out brightly from a door that was opened. There was Tom Bombadil's house before them, up, down, under hill. Behind it a steep shoulder of the land lay grey and bare, and beyond that the dark shapes of the Barrow-downs stalked away into the eastern night.

"They all hurried forward, hobbits and ponies. Already half their weariness and all their fears had fallen from them." — The Fellowship and the Ring, by Tolkien

"Away to the east side of the forest, Old Tom Bombadil has lived in the forest with his wife Goldberry since the time out of mind. There's some tall tales about old Tom, and I have to say he makes me feel kind of young and small when he talks to me, but the one thing you can be sure of with Tom Bombadil is that there's no harm in him, and nothing for any hobbit to fear in his company. — A pleasant Guide to the Old Forest

"In the Old Forest, between Buckland and the Barrow-downs, stands a welcome sight: the home of Tom Bombadil and Goldberry, the River-maiden. Weary travellers will find this an unusually pleasant retreat amongst the ancient and often foreboding forest and the mist-shrouded downs beyond. Tom Bombadil himself is a person who defies specific explanation, though his intentions clearly favor the Free Peoples of Middle-earth. He is pleasant and affable, warm and welcoming, yet undeniably powerful and as ancient as Middle-earth itself. From the modest surroundings of well-tended gardens and delicious meals, Tom Bombadil commands the respect of all around him, from the creatures of the forest to the very land and trees themselves.

"Adventurers in Middle-earth will no doubt want to seek out the home of Tom Bombadil in the Old Forest, as it is a very memorable chapter in The Lord of the Rings. It also represents a critical place to stop and rest, since the areas just outside its welcoming glow contain all manner of dark and uncertain paths." - lorebook