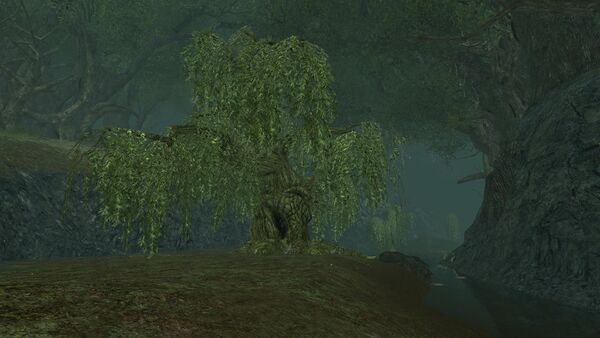 This gigantic but treacherous willow is located at the western bank of the Withywindle, not far west from Tom Bombadil's House. Adventurers should be cautious as this tree not only sucks their power but they can hardly recover from its grip on them. Frodo and his fellowship was almost eaten alive not long ago, would it not have been for old Tom. 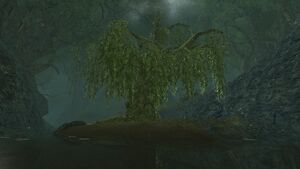 The backside of Old Man Willow

"'My friends are caught in the willow-tree,' cried Frodo breathlessly.
"'Master Merry's being squeezed in a crack!' cried Sam.
"'What?' shouted Tom Bombadil, leaping up in the air. 'Old Man Willow? Naught worse than that, eh? That can soon be mended. I know the tune for him. Old grey Willow-man! I'll freeze his marrow cold, if he don't behave himself. I'll sing his roots off. I'll sing a wind up and blow leaf and branch away. Old Man Willow!'" — The Fellowship and the Ring

"Adventurers in the Old Forest, to the east of Buckland and the Shire, know well that very little is what it seems in those darkened woods. Many tell tales of the very trees whispering and moving, hindering the passage of travellers, many of whom become forever lost amongst the forest's shifting paths. Of these dark legends, perhaps there is none more sinister than the tale of a certain ancient willow, with a heart as dark as the forest itself. Old Man Willow, his trunk immense and his branches spreading out like enormous clawed hands, stands along the banks of the Withywindle awaiting the approach of unwary adventurers. A creature of great power, Old Man Willow is adept at luring his foes into a pleasant drowsiness in his idyllic setting along the river's meandering valley. Travellers had best be wary of his tricks, or they will soon find themselves consumed within the twisted roots and fissures of this evil forest-dweller.

"Old Man Willow is certain to be well known to fans of The Lord of the Rings, and although he will no doubt be a favourite location for players to visit, those familiar with the books will also know to approach him with extreme care. Located near the home of Tom Bombadil and not far from the edge of the Old Forest and the mysterious Barrow-downs, Old Man Willow is the first of the great and ancient powers in Middle-earth likely to be encountered by players. The grumpy old tree has a dark heart, to be sure, and protects his forest realm without sympathy for interlopers into his valley. It could be said that by his actions he is merely protecting the old way of life, as the Old Forest dwindles along with other ancient stands in these dark days. Players should be careful when adventuring along the Withywindle – Old Tom Bombadil may not always be about to save the unwary, as he did Frodo and company in the pages of The Fellowship of the Ring!" - lorebook

"Old Man Willow was a great willow tree of the Old Forest; he was the root cause of much of the Forest's anger and hatred toward the trespassing of the walking things that pass through there. He may have once been an Ent who had become tree-like, but was more likely a Huorn, as the Old Forest was originally part of the same primordial forest as Fangorn. He had great power within the Old Forest, and was able to direct all paths to him." — lotr.wikia