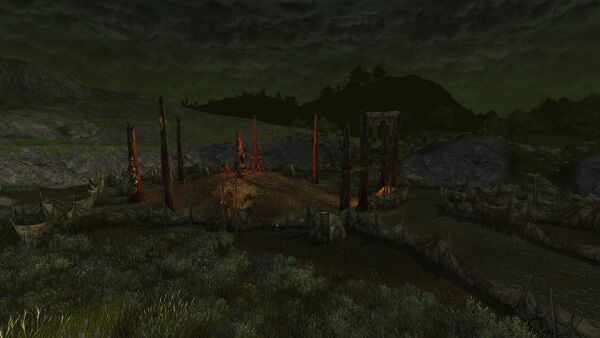 Goblinhole Ruins is a landmark within the Midgewater Marshes, in Bree-land. [33.0S, 43.2W]

In fact, this is a quite a territory of the south-eastern marshes which includes a goblin camp, a set of broken walls ringing a small basin, and some stones, all of which is infested by goblins.

Just by its northern border a few friendly souls have established a small camp. That is a place where travellers can catch some breath, or maybe help those souls with some urgent tasks before hastening away from this forgotten part of the world.

These deeds can be advanced by exploring Goblinhole Ruins:

"Little is known of this ancient pile of rubble, except that goblins have chosen to roost here... A cause for concern to the Men of Bree." — Deed