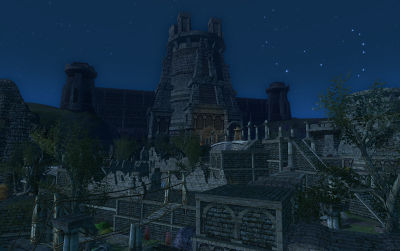 Fornost, the last capitol of the fallen North Kingdom. It is here that the Witch-king of Angmar crushed the realm of Arnor, and it is here to which Angmar has returned to conquer Eriador.

Just outside the entrance is a Camp Site Fire which serves all instances. The Fornost instances are available to VIP accounts or after purchasing the Quest Pack:North Downs.

These landmarks (dungeons) are located inside the instance:

All quests are Fellowship

The beginning is in an area of orcs. One battle is unavoidable in order to proceed, but the rest are optional. In tier 2 the orcs have frontal AoE, so make sure the tank faces a different direction than the rest of the group.

At the end of the Pen area Zhurmat is overseeing the pens. He has 4 goblin adds (both ranged and melee) that join in with him and they must be killed quickly. CC, such as rooting, will not work because another 4 goblins will spawn at every 1/5th of Zhurmat's health (4 more waves total). Zhurmat can apply an interrupt-able heal to his allies. In tier 2 he can also apply a green heal circle. Thus, interrupt any healing, and in tier 2 you pull him and his adds out of the healing circle.

Once Zhurmat is defeated the group may accept the optional Sara Oak-heart quest in the pen area, or press forward.

The water within Megoriath's room causes a silenced effect, so all healers and casters will need to stand on one of the three stone platforms surrounding him to avoid it.

Once the combat begins, burn down Megoriath until he reaches a certain morale threshold when he will break down a wall. After a while, he will break down another wall, and then a third. In tier 2 he will also summon adds which must be taken care of immediately. In order to avoid the silencing water there are stepping stones that you jump on to reach Megoriath. This process repeats itself until Megoriath is defeated.

Megoriath has a powerful ranged attack, he will not use it if you are within melee range so bring a tank.

Megoriath will suddenly move to a new location destroying walls enlarging the fight area in the process. There are a total of four locations he moves too. You can swim to the first and forth location. The second and third location are traps! You can swim to Megoriath's but you can't swim back. Instead, you must jump on top of the pillars (avoiding the water) to get back. All the while Mogoriath will be using his powerful ranged attack until you get close to him again.