From Lotro-Wiki.com
(Redirected from Fangorn Forest)
Jump to navigation Jump to search 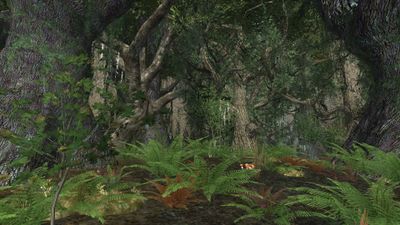 Treebeard, the Ent, the oldest Shepherd of the Trees, once over saw forests which stretched from one edge of Middle-earth to the other.

According to Elrond: "Time was when a squirrel could go from tree to tree from what is now the Shire to Dunland west of Isengard." Of this vast forest, according to Treebeard, Fangorn forest was "just the East End".

And indeed, you rescued a walking tree in Bindbole Wood, in the North Farthing. (Quest:Web-cutter)

You have previously encountered remnants of this ancient wood in The Old Forest of Bree-land where traces of the Entwives can be found in their flowers. (Deed: Flowers of the Old Forest), in Mirkwood, corrupted by Sauron. The Brown Lands contain the garden of the Entwives.

One wonders who is older -- Treebeard or Tom Bombadil?

Fangorn Forest, in the North of Rohan, bordering on the Misty Mountains, was the oldest part of Treebeard's realm, it was here the Ents retreated.
Treebeard maintained several Ent-houses in Fangorn Forest, with the one at Wellinghall in the flanks of Methedras (the southernmost peak of the Misty Mountains, overlooking Isengard; it was also the source of the River Isen), including a tree-lined courtyard, furnishings of different kinds, and a rocky bay with a curtain of falling water.

The fabled Forest of Fangorn is encountered from multiple zones.

One first encounters it on the edge of the Ring of Isengard from the Ox-clan Merchant Camp, in the instance, Fangorn's Edge.

Next, one brushes UNDER the Edge of Fangorn while in the Limlight Gorge area of the Great River in another instance, the Roots of Fangorn

Then there are two large questing areas -- the Eaves of Fangorn, north of the Entwash Vale and the Balewood in Wildermore, both in East Rohan. These are normal questing areas, traversed also as part of the Epic Quest line.

In Update 13: The Breaking of Isengard, the Entwood connects with Isengard (after), the Westfold, Broadacres, and the Eaves of Fangorn

culminating at the foot of the steps of Orthanc in Isengard (after) where he completes Merry's tale: Quest: Interlude: Last March of the Ents.