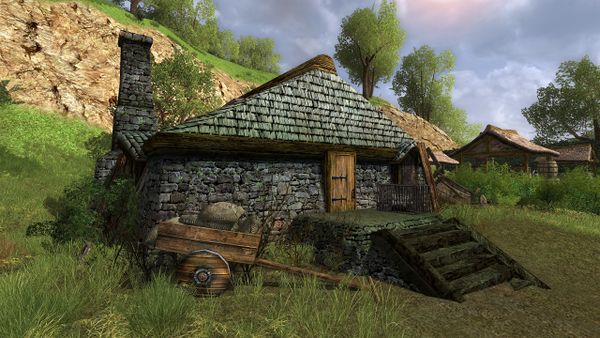 This poor cottage is located at the South Gate square, just next to the stables. Here Bill Ferny used to live, the criminal who just recently stole the ponies from Frodo and his fellowship. Now Bill's cottage stands abandoned, though it used to be oft visited by Southeners and other queer folk.

These creatures are encountered at this location, during the skirmish tutorial:

Bill Ferny himself is not at home, instead staying at the Old Sweetgrass Farm out in the Southern Bree-fields. It is just as well for him, since he is a wanted man by the Bree-town guard after his defection to the Southern bandits out of Andrath.

"'There are some folk in Bree who are not to be trusted,' (Strider) went on. 'Bill Ferny, for instance. He has an evil name in the Bree-land, and queer folk call at his house. You must have noticed him among the company: a swarthy sneering fellow.'" — The Fellowship and the Ring