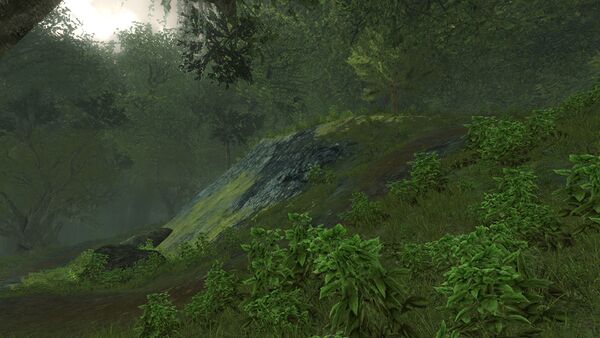 This treeless slope rises above the treetops of Old Forest; nevertheless, little of the surrounding landscape can be seen from here. The hilltop is located centrally of the northern area and is easily reached following the path from Old Forest Tunnel to the south-west.

At this hilltop Frodo and his companions not long ago, at September 26, III 3018, rested and ate their mid-day meal. This far the journey from Crickhollow towards the Barrow-downs had been a walk in the park. Little did they know... 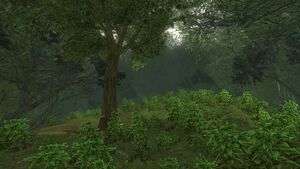 Another view of Bald Hill

These deeds can be advanced by exploring Bald Hill:

"The sun on the hill-lop was now getting hot. It must have been about eleven o'clock; but the autumn haze still prevented them from seeing much in other directions. In the west they could not make out either the line of the Hedge or the valley of the Brandywine beyond it. Northward, where they looked most hopefully, they could see nothing that might be the line of the great East Road, for which they were making. They were on an island in a sea of trees, and the horizon was veiled." — The Fellowship and the Ring

"I like to sit underneath the only tree on its crown on sunny days - there's a good breeze up there above the canopy. Be careful if you want to go back to the Bonfire Glade from here - two paths lead westward, the one you probably came from, and another one that's more northerly. I don't usually go up that way, since I once saw a wolf up there and it gave me a fright. The path south Bald Hill will take you down to the willows." — A pleasant Guide to the Old Forest