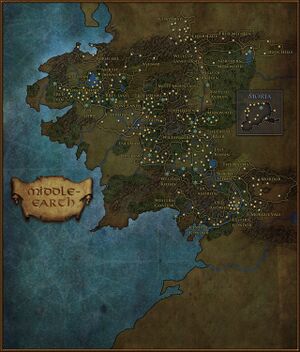 Middle-earth is a big place. It's wise to know how to get around if you're going to tackle the many challenges you will face on your journey.

Your feet are the most common method of travel in Middle-earth. You can toggle the run/walk option with the Insert key, and you can lock yourself in running mode (so you don't have to hold a key down) with the Numlock key.

To run from Ered Luin to the Misty Mountains takes roughly 45 minutes.

Run speed is the movement speed when running and this is the speed that is referenced to when talking about increases or decreases of speed. Run speed is around 6.5 m/s (metres per second) and is the base speed that buffs, debuffs, etc., relates to. Walking is about 40% of run speed which is a decrease of about 60%. A hunter may get a +15% speed bonus, which means 7.48 m/s.

These buffs are additive to other, normal, in-game buffs, however their duration is for a fixed amount of in-game time. That is, if you log out with 30 minutes remaining on a 60 minute buff, when you log back in, that remaining 30 minutes will be there and again begin counting down.

Characters can bind themselves to "milestones" at various locations in the world, and return to those locations at any time (with a 1 hour cooldown). The cooldown time can be reduced to 30 min with the skill Hurried Traveller (LOTRO Shop, 495 LP). It can be further reduced by 25 min to 5 min with the skill Expedient Traveller which also reduces the cooldown time of Return To by 25 min (LOTRO Shop, 495 LP).

"Return To" skills allow a character to return to a specific location once an hour (one hour cool down). The cooldown time can be reduced to 30 min with the skill Returning Traveller (LOTRO Shop, 495 LP). It can be further reduced by 25 min to 5 min with the skill Expedient Traveller which also reduces the cooldown time of Milestone skills by 25 min (LOTRO Shop, 495 LP).

Once obtained, each skill can be found in your Character screen - Skills, Common Skills. You can add them to your Quick Slot bar, or access them via one of the Lua plugins, such as Travel Window.

Each race has a "Return To" racial trait (skill) which they automatically gain for completing certain deeds.

The use of the racial skill requires slotting of the matching trait.

Additionally there are other "Return To" skills which can be purchased from following factions. Requirements for the acquisition and use of each skill is noted for each:

) or occasionally found as drops, mail attachments, or quest rewards. These "Maps" are available to many locations not accessible to either Milestone, Stable travel or Hunter Camp Fires.

All of these maps are one-time use, although they stack and can be bought in batches, and will transport the character only directly to the named location.

These are also occasionally found in Festival Gift-boxes, as Hobbit Presents or included as other official LOTRO promotions.

Player characters are able to return to both personal and kinship homes and also visit other kinship member's primary residences. These four skills will appear in your Skills panel under "Housing."

Many settlements, from large cities to small camps, will have a Stable-master on hand with a few mounts ready to speed you away - for a small fee - to a number of nearby locations (or occasionally not-so-nearby). These travel routes can either be normal travel where your character will actually traverse the intervening distance atop a horse or goat, or "swift", where your character is almost instantaneously transported to the destination.

Characters are invulnerable (aside from the occasional game bug) while travelling using a Stable-master's steed, and can dismount at will at any point when not swift travelling.

See Stable-master for more information, including costs, routes, and locations.

"This plugin provides details on all the travel locations in the game except for some boats. For each location you can list all the destinations with costs and travel restrictions. It can also find the best route between any two stable locations and factor in Milestone/Return/Guide/Muster skills, even providing a clickable icon for the skill when it provides the best route."

For a convenient way to manage your Milestones and Travel skills use: Travel Window Lua by D.H1icks.

This plugin creates a single window that contains all the available travel skills, including the race, class and reputation skills.

Goats are available in several quest hubs in Moria to provide free instant travel to other quest hubs or settlements. These goats follow one of 2 patterns:

Get a steed of your own!

Your character needs to do two things: acquire the Riding passive skill, and purchase a mount.

You can acquire the Riding skill in two ways:

You can purchase a mount in several ways:

You can test the mount system at an early level for free if your character was created after the introduction of F2P. The character will receive a Gift Box which will give a Temporary Horse item. This item allows you to call a special horse for a real-time day, anytime you want, without the need for the Riding skill.

What else should I know?

Mustering Horns are found in various locations around Middle-earth. Typically, they are associated with a questing area where Fellowships are normally needed and almost always have a Camp Site Fire nearby to which a Hunter can bind.

See Camp Site Fire for a list of locations.

Any character can use a Mustering Horn to summon other members of their Fellowship to join them at that location. All that is required is that the summoned character be of the appropriate level.

At level 38, Guardian's Promise creates an

Acorn Whistle that Guardians can trade or mail to another character. Anyone holding a Guardian's acorn and fellowed with them can summon the Guardian to their location.

Finely Carved Rallying Horn a Captain can summon members of his Fellowship to his side.

The Hunter has the unique ability to travel to various locations around Middle-earth taking the members of his fellowship "along for the ride." When a Hunter uses one of these "wayfaring" skills, any member of the fellowship close enough to the Hunter will have the option to travel to the same destination for free.

See Wayfaring for a list of Hunter Wayfaring destinations.

At level 20, Hunters also gain the ability to quickly escape from danger with the skill

Desperate Flight which instantly transports them (and only them) to a nearby rally location.

Finally, Hunters level 26 and above can "bind" to a Camp Site Fire in much the same way as any character can bind to a Milestone. Once bound, the Hunter can use the skill

Return to Camp to transport the fellowship to that location.

The Warden has a unique skill called "Mustering," which allows the Warden to transport themselves quickly to certain locations to enable them to defend some outpost or other. Unlike the Hunter, the Warden can not take anyone along with them on their journey.