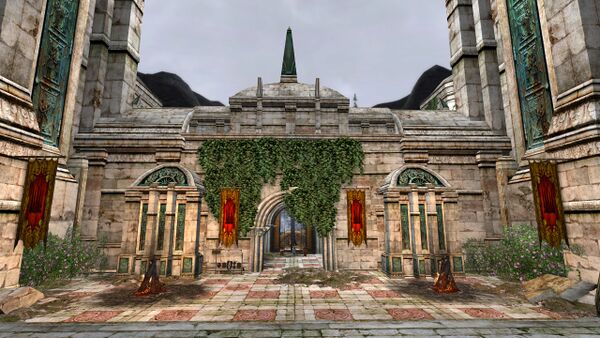 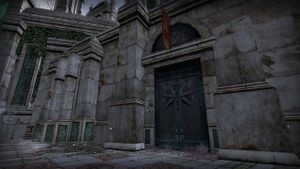 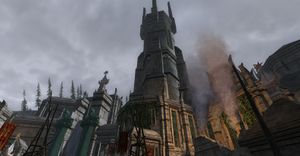 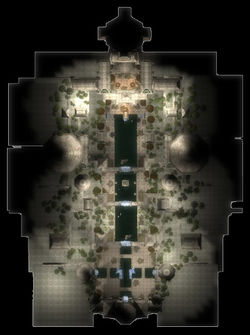 Glinghant, the gardens of Annúminas — once a place of great beauty, now overgrown and fallen into ruin. The stagnant of waters of the gardens have become corrupted by the fell spirits of Angmar, and evil Men do their bidding...

The former gardens of Annúminas are located just under the sheltering mountains to the south-east, between Menelband and Clorhir. This is a world instance but in order to enter, the Wardens of Annúminas must be in control of Clorhir. However, with the instance finder no restrictions apply.

The following mobs are are encountered within the instance:

Glinghant is a relatively small, linear instance that can be completed within an hour by an at-level fellowship.

Darkwaters use fear and disease effects, hence all players should come prepared with Conhuith and Lhinestad Potions.

Four terraces, each with a large body of water in the middle that flows down via waterfalls from the fourth and final terrace, make up most of the instance. There are stairs that lead up from one terrace to the next on either side of these pools. Access to each terrace beyond the first one is blocked by sets of gates, which are controlled by six levers on the first terrace. A non-hostile Flickering Limrafn moves back and forth among the levers to indicate which ones need to be pulled to open the next set of gates. The levers always need to be pulled simultaneously, and failure to pull them correctly results in a set of darkwater mobs spawning.

A lot of Darkwater mobs, along with some Angmarim can be found here. The entire area should be cleared before the doors open at the top of the stairs.

Proceed onto the middle of the terrace, and pull the lever in the middle to begin the event, which causes Nengon to disappear and numerous waves of darkwaters to spawn. They will engage in groups of two or three, and there are approximately six waves.

This terrace has three sets of three darkwaters each; pulling one of a type pulls all three. There are also three Stagnant Oaks, which activate one at a time as each set of darkwaters is defeated. Everybody has to go inside the room before you start pulling (if you are outside the room, you will pull 5-6 Darkwaters), then pull the waves one at a time, then take down the Stagnant Oaks last.

Nengon is waiting on the last terrace. A lot of DPS is required in this battle, so it is recommended that any Guardians (using Overpower) and Minstrels add as much damage as they can. Engage and fight him where he stands, and try to get a Guile (Yellow) Conjunction on him early on. He has a knock-back ability that he uses occasionally, so some fellowships may prefer to pull him to a wall and stand with their backs to it to avoid being thrown around. Be especially careful not to get knocked down to the lower terrace, as this will cause the encounter to reset.

Every 30-45 seconds Nengon will disappear into the floor for a few seconds and call in a wave of 3 darkwater adds. Crowd-control as many as possible, and either AoE the rest while focusing on Nengon or ignore them. The longer the fight takes, the more waves he will call in, so do not waste time trying to take out the adds because the fellowship will quickly get overwhelmed. Once he is defeated, deal with the darkwaters and hope for good loot!

Challenge mode requires Nengon and all of the darkwater adds that he summons to be defeated within 30 seconds of each other.