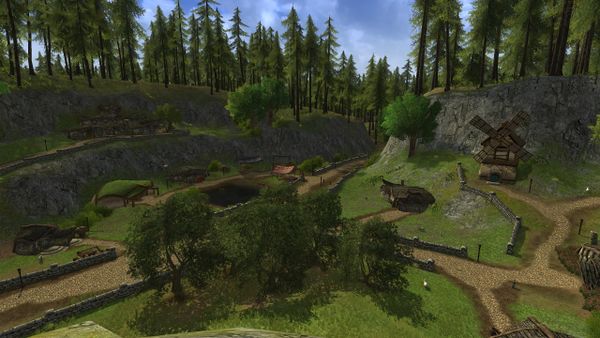 Brockenborings is a settlement located within the area of Greenfields, in the Shire. [27.4S, 68.1W]

This village lies just outside the eastern edge of Bindbole Wood, at the south-westernern corner of Greenfields where all its sheep farmers herd their flocks. Brockenborings supports a bustling community of townspeople, merchants, and crafters.

During festivals Brockenborings live up and just east of the village several games and fun takes place, sending waves of expectations all over the Shire. The year around adventurers come by for the Skirmish Camp at its northern outskirts. 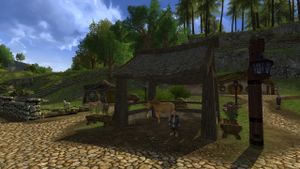 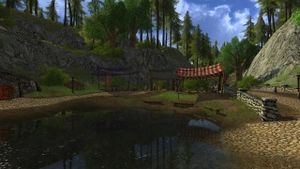 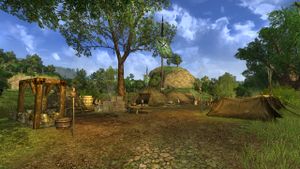 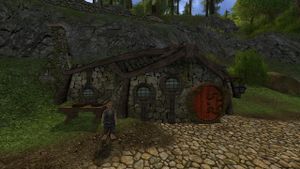 See "starting quests" or the interiors for more quests
Starting:

See "list of NPCs" within Brockenborings and its interiors 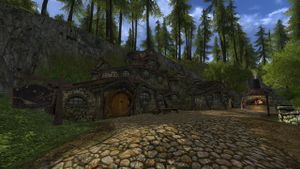 The Plough and Stars

The Plough and Stars

Elevated above the village the picturesque tavern attracts locals and strangers of all sorts; the tavern keeper Halson Tubwort welcomes everyone. During festivals the inn is even more lively. 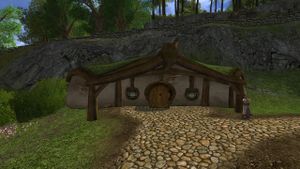 Just south of the stable is the Watch Office, from which Bounder Primstone and the Bounders watch over the village and the neighbourhood. 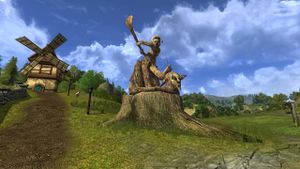 The statue of the "Bullroarer"

The Statue of the Bullroarer

This statue depicts the hobbit hero Bandobras "Bullroarer" Took after he defeated the goblin chief Golfimbul in the Battle of the Greenfields. A happening that made cause of the game of Golf.

During the Spring Festival in the Shire, hobbits compete in a game called the Bullroarer's Challenge in which they drink a large amount of Bullroarer's Brew, toast to Bullroarer's health, and then try to run across fences set up between two stages without falling off the fence. Some hobbits practice all year long for this game which derives from Bandobras running along the tops of fences of the Great Smials to keep in shape and hone his skills.

"The day after the battle Frodo rode to Michel Delving and released the prisoners from the Lockholes. One of the first that they found was poor Fredegar Bolger, Fatty no longer. He had been taken when the ruffians smoked out a band of rebels that he led from their hidings up in the Brockenbores by the hills of Scary." — The Returns of the King, by Tolkien