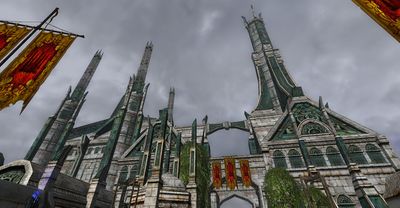 The Black Numenoreans in league with Amarthiel have come to Ost Elendil, seeking to establish a foothold in Annúminas, while the Rangers of the North assail the city of their fathers in a desperate attempt to drive them forth.

Ost Elendil was the seat of power in the former Kingdom of Arnor. It contains the throne room from whence the kings of old would rule their once-grand empire.

The entrance is located on the fortified island of Tyl Annûn overlooking Annúminas from the north. 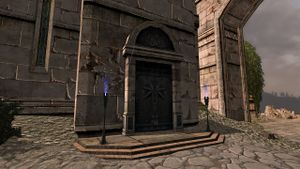 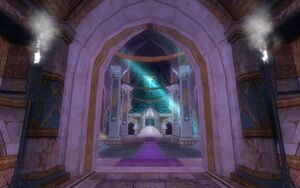 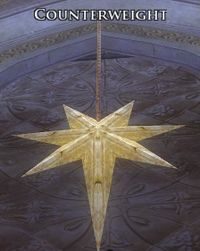 Ost Elendil is a short but very difficult instance, and can be completed within an hour unless there are any fellowship wipes.

From the entrance hall, proceed to clear one or two pulls of Angmarim until reaching the main hall just beyond. At the end of the hall, Guloth awaits along with six Elder Morelendil Guard adds. The guards will not attack players who walk by, but walking up the stairs towards Guloth activates the first boss encounter.

Before engaging Guloth, the south-west chamber must be cleared.

Notice a Counterweight hanging from the ceiling at the back of each room. Activating one will open the window behind it, and a brilliant light shines through the south-facing ones. This light is known as the Light That Burns, because it instantly defeats any Morelendil Guard and Elder Morelendil Guard that move into it, transforming them into Tormented Spirit mobs. These spirits have a Shadow Shroud buff, making them very difficult to defeat. However, this can be counteracted by drawing them into Exposing Light, located in the centre of the main hall in front of the stairs leading up to Guloth. Notice, you must regularly re-open the window to refresh The Light That Burns when it runs out.

After Guloth and his guards are defeated, head up the stairs and down the passage into the throne room. Also the throne room have windows which can be opened to let in The Light That Burns. The Exposing Light is located on the opposite side of the room, it shines through stained glass windows in two different locations onto the ground. Sitting on the throne at the far end of the room is Balhest, the second and final boss. The fight is considerably difficult, requiring a lot of coordination amongst the members of the fellowship.

Once Balhest is defeated, the day is won and our heroes can finally get some rest. Don't forget to take a nice screenshot in front of the throne!

In order to complete the challenge, the typical scenario is to open the second to last window as you walk down the left hand side toward the throne. Waves of mobs will come, and once defeated, the 3 Priestesses are drawn to the window by the tank. The Priestesses must not be defeated before Balhest, he must be defeated first. However, Balhest may not be attacked until they are all at 80k or lower morale. You must control your dps, and the tank must bring Balhest to the window. Once Balhest is down, the challenge is complete and all the Priestesses may be defeated as well.

At one time there was no greater place of splendour in the North than Ost Elendil, the palace of Elendil of Westernesse in his great city of Annúminas. But those days are long past. The great, white walls of its towers have grown stained and ruined, crumbling into decay with the rest of the city. Time and the creeping wilderness claimed Annúminas and Ost Elendil long ago.

Then came the tomb-robbers, seeking what treasures they might plunder, but even they are not the greatest insult to the kings of old. The Shadow of Angmar stretches forth to seize Annúminas, and the ancient seat of Arnor's kings is too great a prize for them to resist. — lorebook 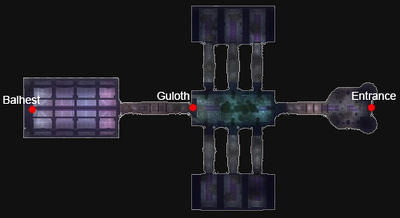