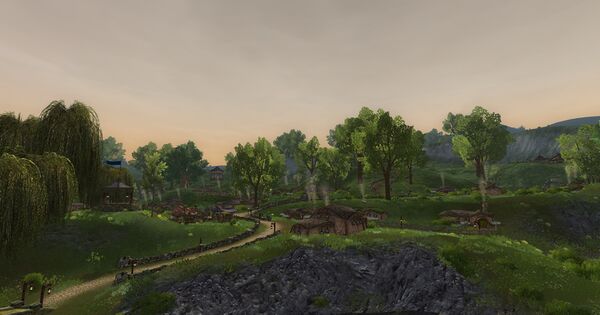 Nobottle is a settlement located within the area of the Yondershire, in the Shire. [26.9S, 78.9W]

The lovely village named Nobottle is the home of many friendly Hobbits. It lies about where the roads to the Shire, to Long Cleeve, to Tighfield, and to Oatbarton in Evendim cross. So the hobbits are used to a steady flow of strangers but yet the same cheerful and happy. Almost all at least.

Nobottle is famous for its beer, brewed on the big farm to the west. But the massive amount of bee-hives, and the sound of bees, implies Nobottle must be producing lots of honey as well.

Services include a stable-master, milestone, the only mailbox of the Yondershire, the quartermaster of the Yonder-watch, a healer, provisioner, and supplier. As well as many quest-givers. 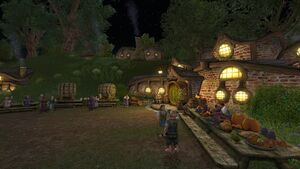 The Fox and Fiddle Inn 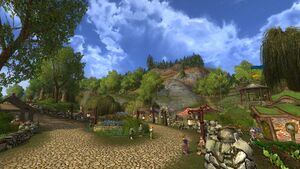 Village Centre by the Stable-master 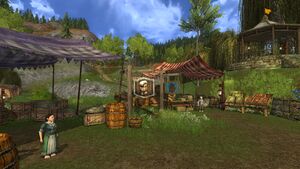 The Market of Vendors 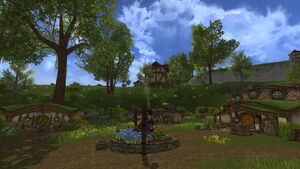 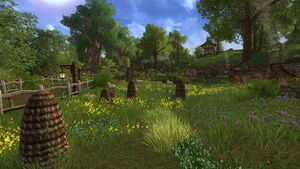 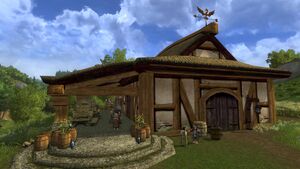 Though the three lineages of hobbits, Harfoot, Fallohide, and Stoor, had long since intermingled, the Tooks still had a strong Fallohide streak, which made them more adventurous than many of their kin. This was rumoured to be one of the reasons for their wealth, for various Tucks and Tooks were said to have found strange treasures among the ruins on the edges of the Shire. Most other hobbits viewed this behaviour as queer, but Tookishness was a point of pride among many members of the family who shared the restless mindset of "Old Nuncle Blanco."

One of the places they liked to roam was the Yondershire, and they were more wont to interact with the Rangers there; from them they learned much skill at arms. It became the custom for younger sons and daughters of the Thain to serve as Reeves, unofficial guardians of those lands, helping to keep the Orcs and other fell things that lurked there at bay. In the time of Ferumbras I, the third Took-thain, they founded Nobottle in the southern fringes of Yondershire; this new village, the first sizable new hobbit-hold in centuries, was soon thriving, and became known for the quality of its barley and ale. The Grubb family, long friends of the Tooks, became its chief clan. — Deed