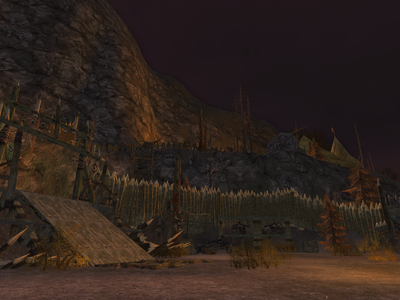 "In the late evening hours, a small group of refugees sought refuge in the hidden Ranger-camp of Esteldín. These refugees were followed by a small group of goblin-scouts that quickly fled to Dol Dínen to bring word to their chief, Graug. Siniath the Ranger has asked you to seek out Graug and defeat him before he can spread word of the Esteldín's location. As you arrive near Dol Dínen, the first rays of false dawn can be seen overhead."

Attack at Dawn is a level 30 - 140 skirmish, located within Dol Dínen, in North Downs.

There is one quest in this skirmish that scales to your level. You will automatically receive it when entering the skirmish.

Fight your way through the courtyards. Each courtyard is barricaded with a massive gate.

For all recorded variants of mobs found within the instance, see Category:Attack at Dawn Mobs.

Standard skirmish enemies scale in difficulty type depending on the size of the skirmish. Prefixes indicate the difficulty of the variant, ranging from Weak (Swarm) to Mighty (Nemesis).

The following base creatures can be found within this skirmish:

Up to 2 of these Encounters may appear in this skirmish:

Competing the skirmish will reward Rangers of Esteldín Reputation.