The Halls of Night 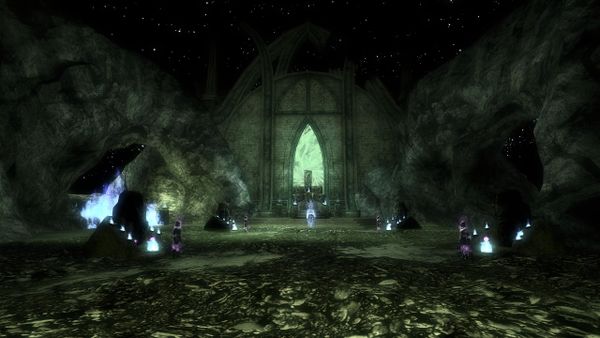 "The Hill-men of Angmar have discovered an ancient barrow hidden away for centuries. The leaders of Aughaire have called for adventurers willing to brave the tomb rumoured to be filled with wealth and riches. Markings surrounding its entrance bear an ominous warning; twisted creatures and slumbering warriors at the foot of a powerful sorcerer..." 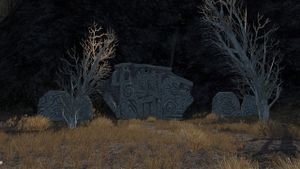 The Halls of Night Entrance 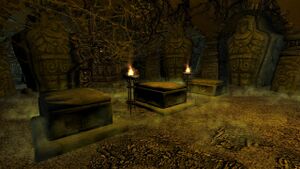 The tomb from where to enter the instance 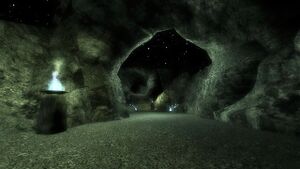 Rocky passage to the one of the boss chambers 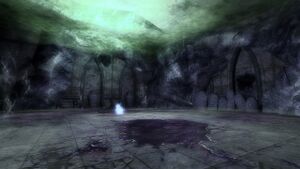 Along the southern cliff-side of Fasach-larran, northeast of Aughaire. Characters must discover the entrance in order to join.

This is a scaled instance, designed for a Small Fellowship (3 characters) from level 40 and up.
It is available in the Instance Finder, as "Halls of Night".

There are two tiers available, with a challenge quest available at level-cap.

The Halls of Night Deeds

The Halls of Night Titles

The Halls of Night Mobs

The instance is fairly short, with few trash pulls but multiple sub-bosses.

○ Tomb-spirit - These come in 3 colours, and have only basic melee attacks. Each character is assigned a colour at the start of the instance, and getting the defeating blow on a spirit that matches their colour will grant (or tier up) an Empowered Spirit buff.
○ Tomb - These periodically spawn Tomb-spirits. They are invulnerable until their nearby Tomb-guard is defeated.
○ Tomb-guard - These have a healing skill, and must be defeated in order to damage the tombs they protect.
○ Hungry Spirit - These have an induction attack that causes a combat-permanent colour drain debuff, weakening and slowing the character and preventing it from gaining any bonuses from Tomb-spirits.

Panic starts with two Tomb-guard adds that can heal him, so those should be taken out first. He will periodically choose a colour and force attack that character, while Tomb-spirits of the other two colours spawn around the perimeter of the room. These can be defeated by the appropriate character for buffs, but they don't aggro unless attacked so it's usually quicker to just focus on Panic.

Terror periodically goes into stealth and moves to another location in the room, spawning two clones of himself with lower morale. They all hit hard, so try to keep them off light classes. To keep track of the main one, mark him with a raid icon (such as the skull). The portals in the floor stun and damage anyone who stands on them.

Nightmare is in the central room, approaching it will start the final encounter and spawn Tortured Spirits along the sides of the room. Nightmare has the same colour-draining induction as the Hungry Spirits, so try to interrupt him, but an affected character can cure the debuff by defeating one of the Tortured Spirits. This will fail challenge mode however, so the tank should stay away from the sides to avoid accidentally hitting them. Nightmare has a frontal AoE, so the other characters should stand behind him.

As Nightmare hits certain morale thresholds, he will activate a Tomb and its guard. A DPS-heavy fellowship can try to focus down Nightmare before the tombs spawn too many adds for the tank to handle, but a slower group will want to stop hitting Nightmare and take out each tomb as it becomes active. Bring disease potions, as power drains are an issue at higher levels.

If you have the optional quest Family History (given by Declan in Aughaire), wait for "Shadow" to finish talking and complete the quest with him before you leave through the portal. 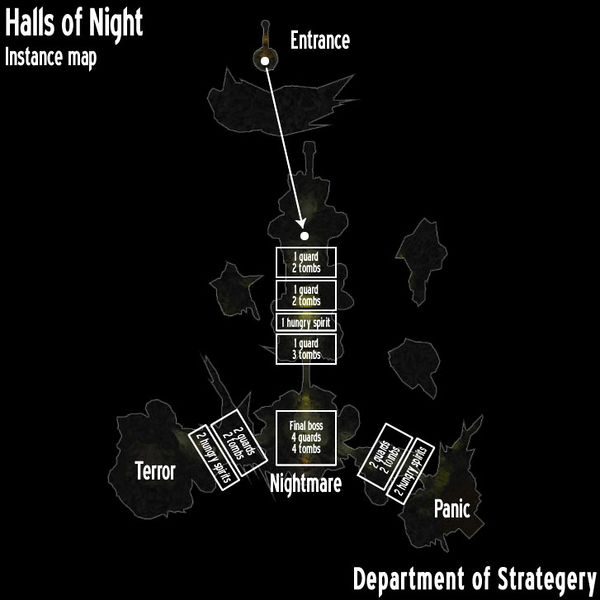