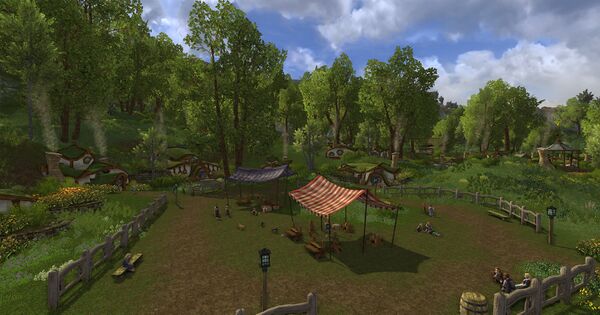 Tighfield is a village located within the area of the Yondershire, in the Shire. [Yondershire]

The wonderful hamlet sits on the road towards Ered Luin and sees a steady stream of travellers of all sorts. The farmers here grow all sorts of vegetables and raise from chickens to goats and cows. Large orchards are found in the south.

Tighfield affords services such as stable-master, quartermaster for the Yonder-watch faction, healer, provisioner, and supplier. Near the stable is the famous inn, the Elbow's Bend. 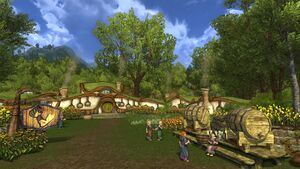 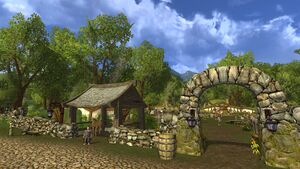 The Stable with the inn behind 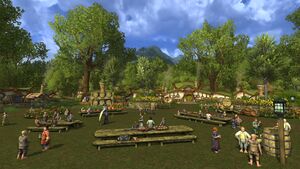 The patio of the Elbow's Bend 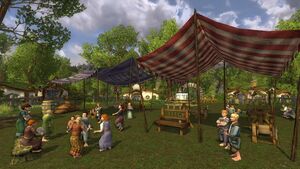 Market Day at the village centre 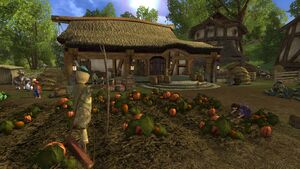 A wonderful village farm to the west

"This legend has its roots some years back, but not so distant that it has been forgotten, or might be disbelieved!" Bingo tells you. "Indeed, the prime movers in this tale can still be discovered by one who has visited every site in Yondershire... if you know where to look!

"In the town of Budgeford, far to the south, there was a great pig called Master Stiffbristle. He was enormous, just a tremendous example of the species, and his owner used to bring him throughout the Shire... not to sell him or eat him, never that! He merely intended to show off his impressive size.

"Not just hobbits took note of Master Stiffbristle, the impressive Hitherboar of Budgeford. Nay, there was also a beautiful Yonderboar who dwelled in Tighfield, and she was called Lady Uproot. When she learned there was a famous and impressive boar touring the Shire, why, no fence could keep her penned in! She broke out of every pen into which she was put, travelling dozens of miles to witness Master Stiffbristle in all his glory.

"None could keep Master Stiffbristle and Lady Uproot apart, and it is said they still dwell somewhere within Tighfield. But who can say for sure?" — Deed