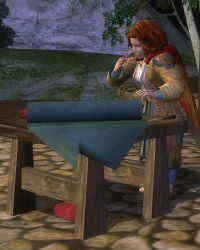 "A skilled tailor can make simple clothing from common cloth, but with time and practice they can learn to create garments of great beauty that provide significant protection to their wearer. The Tailor can also work with tanned hides to produce leather armor – light, tough and suitable for travel."

Tailored armour is an essential alternative for those classes that cannot wear heavy armour; for instance, a Burglar whose stealth depends on not clunking around like a tin can, or a Minstrel who needs the freedom of movement to perform motivational flourishes on a delicate instrument. A Tailor produces pieces of light and medium armour that protect the wearer and can provide other bonuses. These pieces range from common rough cloth to the finest Elven silk, depending on the skill of the tailor.

A guide to attaining Tailor Mastery

A list of all component items that are used to craft Tailor recipes: Tailor Components

For crafting clothing and armour, a Tailor uses boiled leathers, which are created by a Forester. An Explorer Tailor is also a Forester and will be able to gather and boil animal hides into usable leather on his own. Armourer and Yeoman Tailors will not have this ability, and need to find a Forester who will convert their hides to leather. A number of advanced recipes requires Crafting Rare Components.

Hides can be harvested by characters by defeating Beasts. These pieces of animal hide have a chance to drop from those types of Creatures.

Foresters are able to process hides into leather by boiling them at a Workbench.

The following Professions can use the leather for materials in their own crafting recipes:

Tailors also use bolts of cloth and thread for sewing; these items can be purchased from Novice and Expert Tailor NPCs and from Suppliers.

To critically succeed while crafting item, a Tailor must have achieved proficiency in the crafting tier for that item. After gaining proficiency, the base chance to achieve critical success is 5%.

A complete list of Tailor recipe indexes by tier

An index of items that can be crafted using Tailor recipes

Tailors of all levels are eligible to join the Tailor's Guild, but the guild recipes require Expert tier and above. To join a crafting guild one must first speak to a Master of Crafting Guilds, and they are always found in the vicinity of a guild hall and at many other locations. Then, travel to the Craft-hall of Esteldín, in North Downs and speak with Guild Leader Hambrennil to continue the quest. The Tailor's Guild-hall is found inside the craft hall, to the south.
NOTE: since Update 27, players may find the guild NPCs located in the House of Craft in Minas Tirith (Midsummer) [23.2N, 54.9W] to be preferable to Esteldín, particularly if the crafter has a second guildable profession -- Metalsmith for Armourer or Cooking for Yeoman -- it can also be guilded in the same location in Minas Tirith (Midsummer), thus obviating a separate trip. Minas Tirith (Midsummer) is available to characters of all levels. At Minas Tirith (Midsummer), the pattern (Reputation Item) recipes are purchased from the Guild-leader; there is no separate NPC for guild-reputation-item recipes, as there is in other locations. The only downside of Minas Tirith (Midsummer) is that the "Introduction" quests for each guilded profession cannot be turned into the Guild-leader, since those quests require a specific named NPC, who does not reside there.

The following quests gives reputation for Rangers of Esteldín: