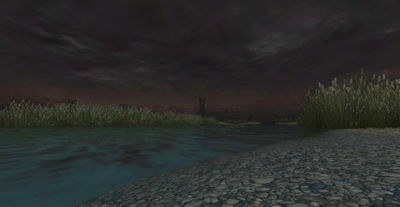 Ethir Anduin is a location within Lebennin in the region of Central Gondor. [86.6S, 45.1W]

Anduin, the Great River, is the longest stream of Middle-earth. Flowing from the Grey Mountains far to the north of Rhovanion, it runs through the Vales and around the Carrock, passes Gladden Fields and Lothlórien; to the Argonath and Nen Hithoel, down the Falls of Rauros and into the Mouths of the Entwash; passing by Cair Andros and through Osgiliath, towards Pelargir; and finally entering the Bay of Belfalas, and thus Belegaer, the Great Sea. The Ethir Anduin marks the end of this remarkable journey. Long has the gondorian navy sailed these waters and kept them safe, but during the recent assault of the Heirs of Castamir and the Corsair fleet of Umbar, many ships were sunk and now the delta is littered with burned shipwrecks and marooned sailors.