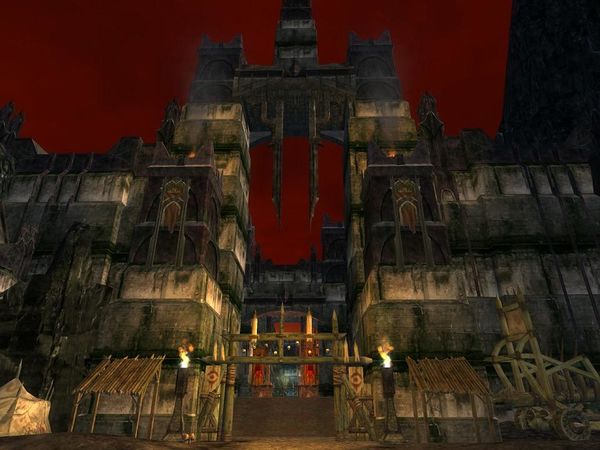 Lying on the outskirts of Carn Dûm is the fortress of Urugarth, home to countless Yrch, goblins, and other curs of Angmar. The breeding grounds of Angmar's horde.

Travellers, proceed west from Himbar along the road, or via a mountain pass from Torech-i-Bogbereth. Proceed through the Gate of Shadows (it may be closed). Then head south through a lot of elite orcs until reaching the gate on the east side of the road.

This is designed for a Fellowship with level 50 characters.
It is available in the Instance Finder.

The first two bridges are guarded by goblins. The left bridge leads to Sorkrank and Burzfîl. A mountainous path behind the right bridge leads to the troll encampment of Dushkâl. The right bridge leads further into Urugarth and eventually ends up at a small fortress garrisoned by goblins and their leader Akrûr. From Akrûr, the path to the east leads to Lhugrien's Roost. Lhugrien will only appear after all the Fire-drake Hatchlings and Fire-drake Wardens fall. A door leading to Asht-shâpol and a bypass of much of the instance lies within the roost but requires Steel Key, a passive skill obtained by using a loot drop from Gruglok. With no key, the way forward leads back past Akrûr's throne and further to the lower levels of Urugarth.

Dafrim and Kughûrz are sometimes found patrolling the path leading downward into Urugarth. Gríshakrum and his minions dance around a bonfire near the bottom of the ramp. The first foul idol stands guarded by several orcs at the bottom. There are a total of five foul idols and when lit on fire with a nearby torch each will pull a group of three guards from Lagmas' Court. Directly behind the first foul idol and across the small, open area with orcs and imprisoned pale-folk lies the second foul idol, also heavily guarded. The path to the north leads to a long corridor fortified with orcs and goblins who will call for reinforcements if not interrupted. A path to the right leads to Lagmas' Court but is barricaded by guards.

Further north lies the third foul idol and taking the path to the left leads to the Urugarth Kennels with Athpukh as overseer and his right-hand warg Lâmkarn. In the beginning of the fight, both Lâmkarn and Athpukh unleash more wargs during the fight, but once Lâmkarn succumbs, Athpukh is left to fight alone. After the fight, reinforcements arrive to investigate the commotion in the kennels.

The way forward leads back along the heavily barricaded path toward Lagmas' Court across a bridge over tainted, green water. Before crossing the bridge, however, the way north leads Fell-water Falls wherein lies another foul idol and tentacles needed for the quest Further Upstream. The way south leads to the final foul idol needed to complete the deed. After crossing the bridge but before entering Lagmas' Court, head north along some metal grating which leads to Gruglok. Upon approach, Gruglok runs to his tower and calls forth waves of trolls, pale-folk and orcs. Gruglok drops the Steel key needed to take the shortcut from Lhugrien's Roost and to enter the platform where Lagmâs awaits.

Backtracking to the large bridge over the tainted water, Morthrâng and his two trolls, Brízrip and Thordragh, await in Lagmas' Court. The amount of additional soldiers in the court depends on how many foul idols were burned. Crossing the line into the court will cause Morthrâng to direct all of his forces to attack at once, however, a ranged player can pull smaller groups of forces without triggering the entire force. It is also possible for a player to enter with stealth, stun or daze Morthrâng, and fall back so the group only has to deal with one enemy. Up the ramp and through the gate awaits Lagmâs who will direct his elite craban to enter the fight as the battle progresses.