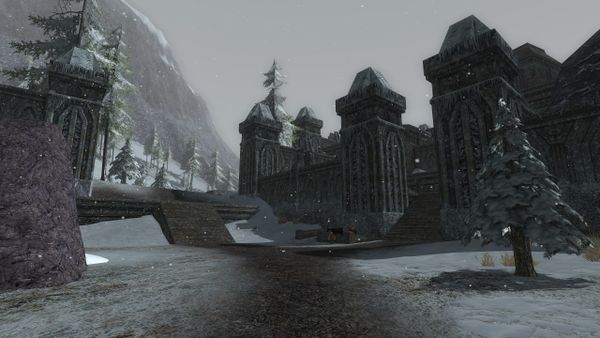 Hrimbarg is an outpost located within the area of Northern High Pass, in the Misty Mountains. [24.6S, 6.9E]

This windswept outpost, only recently coming into use again, sits on the ridge which splits the northern and southern High Pass. Due to the prevalence of the severe snow-storms in the area and the thick mist of the mountains, the Thorgest's Haven welcomes travellers with indoor warmth and some amenities.

For adventurers passing by to reach Goblin-town, ride straight northwards to the Northern High Pass Camp. 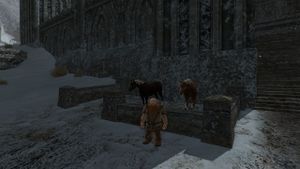 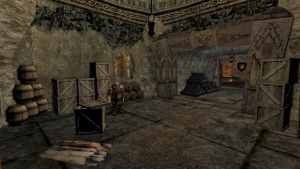 Founded before the city of Helegrod. Hrimbarg was once called 'The Crown of the Misty Mountains' by dwarves who lived there, and they marked it as the highest dwelling of their people in all the world at that time.

Alas, it fell neither to goblins nor giants nor dragons or other wickedness –- but tales say it fell to a great storm that drove down upon the High Pass and did not relent for five long years, choking the passes with vast mountains of ice, even burying Hrimbarg itself beneath a deep, featureless blanket of snow.

When at last the storm relented and their fellows from Moria came north to relieve their brothers at Hrimbarg, not one dwarf was found alive, all having frozen or starved during the long years of isolation. It was decided thereafter that Hrimbarg should not be resettled, and it has stood empty for years beyond reckoning. — Deed

East of all these lands spill the long valleys of the High Pass, caught between a tribe of monstrous Men and a horde of vengeful goblins. In between, all but forgotten by the Dwarves, a derelict stronghold stands in the snow, now little more than a lonely lodge tucked into mighty stonework. This is Hrimbarg. Look here for a warm fire and strong encouragement to brave the nearby Writhenbores—nesting caves of the valley’s many Worms.