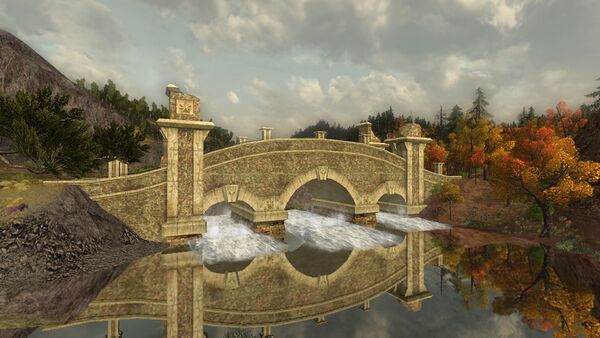 This ancient and majestic bridge connects the east-most of the Lone-lands with the Trollshaws, spanning river Hoarwell (Mitheithel in Sindarin).

Not long ago Strider, Frodo & Co. crossed this river, heading for the safety of Rivendell. And now two Elf scouts are monitoring the eastern side of the bridge, advising travellers who come by. 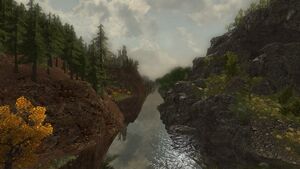 These deeds can be advanced by visiting the Last Bridge:

History: Probably built during the early Third Age when it is known that the Dúnedain built at least two other bridges. This would make it about 3,000 years old.

Beyond the Last Bridge the domain of Men ends. While the Lone-lands have long been left desolate and rarely-traveled, the lands beyond are altogether wild and untamed. Only the well-seasoned wanderer or skilled adventurer would brave Trollshaws alone. — Deed

The Last Bridge is the easternmost bridge built by the kings of Arnor upon the Great East Road. It marks the border between the barrens of the Lone-lands and Trollshaws in the shadow of the Misty Mountains, where lies Rivendell, refuge of Elrond Halfelven.

As Strider led Frodo Baggins and his companions to Rivendell they crossed the Last Bridge, and there Strider discovered a beryl — an Elf-stone, or more specifically, an emerald — which possibly was a sign that friends had passed that way. Indeed, the mighty Elf-lord Glorfindel had left the stone, and later he aided in the rescue of Frodo from the Nazgûl at the Ford of Bruinen. — lorebook lorebook

On 11 October T.A. 3018 three Black Riders were guarding the bridge against Aragorn and the hobbits on their journey to Rivendell. Their plan was foiled by Glorfindel, who drove them away and left his token, a green beryl, on the Bridge. Two days later Aragorn found the beryl, took it as a sign that the bridge was safe, and led the hobbits over it. — tolkiengateway

Older even than the ruins of fallen Rhudaur that mark hilltops across the Lone-lands, the Last Bridge stands as the sole safe crossing over the Hoarwell river (Mitheithel in elvish tongue) and east into the Trollshaws. It has endured millennia of wars and neglect. Many have walked these stones — ancient kings and savage armies, Elf-lords and Nazgûl. — Hero's Guide