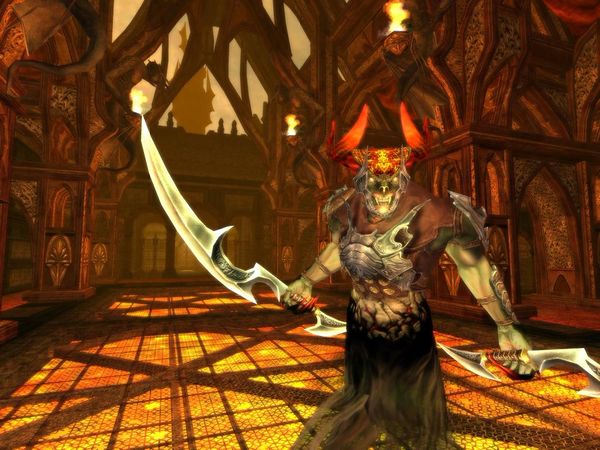 "Having obtained all the tools they need to contain a terrible spell, the sorcerers of Angmar retreat to Barad Gúlaran to fulfil the commands of their mistress Amarthiel, while the Rangers of the North seek to hinder them..." 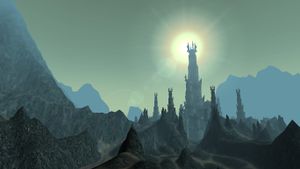 Barad Gúlaran from a distance 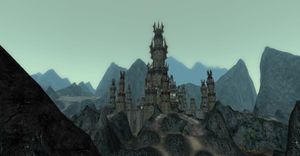 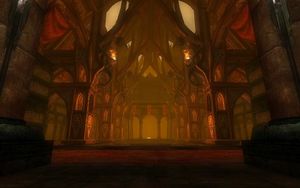 The main hall within Barad Gúlaran 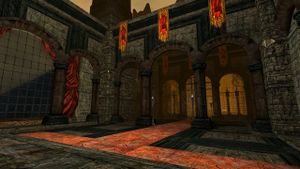 Travellers head north from Gabilshathûr until reaching the road that branches off into Imlad Balchorth and Nan Gurth. Then they take the road to Nan Gurth, but break off to the right halfway along the road and proceed through some mobs while staying near the cliff-side. There is a path snaking along the cliffs, leading to just south of Minas Deloth, where it will branch off into a path that leads straight up to the door, which is the instance entrance. Watch out for some Elite and Elite Master mobs patrolling the path.

This instance is designed for a Fellowship with all players being level 50.
It is available in the Instance Finder.

Estimated completion time is less than 2 hours, without wipes.

Barad Gúlaran is a fairly short instance, and a full clear without wipes takes less than two hours. Due to the difficulty of the bosses (especially Udúnion), it is highly recommended that all members of the fellowship are level 50.

Currently, being defeated in Barad Gúlaran and retreating will send characters back to the entrance inside the instance.

Barad Gúlaran is located in the centre of a series of bridges that surround it like the spokes of a waggon-wheel.

Barad Gúlaran used to be the fortress of the dreaded Witch-king, chief of Sauron's Nazgúl.

"When the Lord of the Nazgûl first came to Angmar and established his new realm as Witch-king, he built the great city of Carn Dûm and thence sallied forth to conquer Arnor. Unbeknownst to all but the Wise, however, he also built a fortress amid the wastes of Angmar, which he called Barad Gúlaran. There, he continued his studies in the dark arts he had learned from the Dark Lord Sauron.

Though many secrets of power and the world of shadow had been laid bare to him when his Ring consumed him, there was much still he wished to learn. Chief and most secret of these was a way to break the bonds that enslaved him to the Lord of Barad-dûr, and thus make himself a great Power. When Eärnur, Prince of Gondor, and Glorfindel of Rivendell drove him from Angmar, the Witch-king’s hopes of gaining this power were dashed. He could never again return to Angmar, and was forced to leave his secrets in Barad Gúlaran free to whoever sought them." — lotro.com