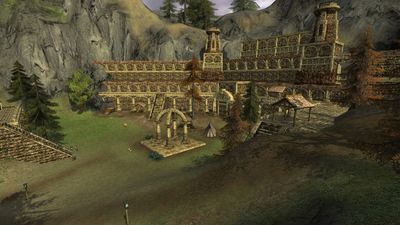 Rangers of Esteldín is a reputation faction located in Esteldín.

The hidden sanctuary of Esteldín stands as the gathering place of the strength of Men in the North -- the only power other than Rivendell itself that might offer pause to the growing power of Angmar.

Once a secretive organisation, the Rangers are beginning to seek the aid of any stalwart who would raise a blade against the darkness as the North prepares for war.

Some Orcs in the North Downs and Angmar drop items that give reputation.

Right-click the items in your inventory.

Tasks can be turned in to the Tasks Bulletin Board for reputation at these locations:

Access to the following items from the vendor Malenfang outside the Craft-hall of Esteldín at Friend standing:

Access to the following item from the vendor Bordhreg inside the Craft-hall of Esteldín at Ally standing: