From Lotro-Wiki.com
(Redirected from Legendary Items)
Jump to navigation Jump to search 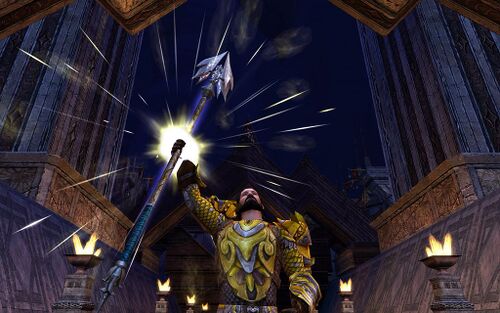 Legendary Items are class-specific equippable items that can be customized to suit a character's combat needs, build, and style, as opposed to standard weapons and equipment that have unchangeable stat bonuses. Legendary Items (LIs) are customized by adding Traceries, which are granted as quest rewards or as drops in instances. Traceries are improved by using Enhancement Runes which are also rewards and drops. Periodically as a character levels Legendary Items can be improved through Reforging which raises the item level and base stats of the item (DPS, Tactical Damage Rating, etc.).

Characters obtain their first Legendary Items as rewards for the following quests:

A character must be at least level 45 to complete both quests (although they may be difficult for under-leveled characters).

After completing the quest [50] Vol. II, Book 1, Chapter 12: The Watcher in the Water, characters gain access to Gobeth Teithian, the Archive of Traceries in the Last Homely House in Rivendell, where they can barter with the vendor Legendary Weapons/Class Items for additional Legendary Items using Ancient Script.

Ancient Script are the primary barter currency for Legendary Items, Traceries, and Enhancement Runes. They have a Currency Cap of 10,000, are Bound to Account, and are stored in the Wallet. They can be obtained by the following means:

Legendary Items can also be obtained by purchasing a

Legendary Item Box from the LOTRO Store for 495

Legendary Items must be reforged before they can initially be used and should be reforged at periodic intervals thereafter (approximately every five character levels). Reforging is done at a Forge-master or by using Subscriber Town Services.

There is no benefit or drawback to reforging earlier or later within a level range; the effects of the reforge will be the same within that range. It is also possible to skip level ranges. The following table summarizes the Item Levels and Tracery Slots gained when reforging at each character level range.

The current maximum rank achievable for an LI Items Level was raised to 140 on 17th August 2022.

Traceries are items that are slotted into Legendary Items in order to grant skill buffs and stat bonuses and are the means by which characters can customize a Legendary Item to suit a particular use, build, or specialization. Traceries function much like Essences in that they are slotted into items and then can be unslotted at will using Mithril Coins or a Tracery Reclamation Scroll.

There are four distinct types of Traceries each with its own corresponding slot in a Legendary Item.

Traceries can be obtained either as drops from instances/raids, as quest rewards, or via barter. Higher tier instances increase the chances of dropping a higher quality Tracery. All slottable Traceries can be bartered for in Gobeth Teithian, the Archive of Traceries. Numerous barter vendors (appearing as bookcases) corresponding to the different types of Traceries are present in that location. 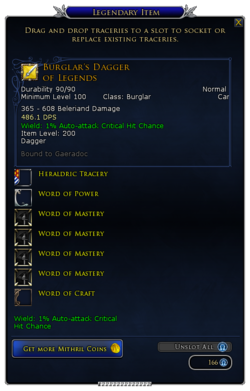 Enhancement Runes are available in different qualities (or rarities):

Enhancement Runes can be acquired as quest rewards, drops from bosses in instances, or bartered for at Gobeth Teithian, the Archive of Traceries.

Enhancement Runes, Lvl 131. Only eleven of the Runes are applied from the stack though, raising it to Item Level 460 (since the Enhancement Limit for the Uncommon-quality Rune is 460). In order to max out the Tracery the character must then apply five Rare-quality

The following table lists the inherent stats on each Legendary Item based on its Item Level.

Here is a summary of the process to recover Ancient Script, Enhancement Runes, and Shattered/Cracked Traceries from old Legendary Items:

Characters stuck in the Vol. II, Book 1 Epic Quest The Walls of Moria

If your character received their first Legendary Item by completing the quest [50] Vol. II, Book 1, Chapter 9: A Weapon of the Elder Days under the old Legendary Item system but did not complete the quest [50] Vol. II, Book 1, Chapter 11: Forged Anew, then you are unable to progress the quest chain under the new Legendary Item system and can neither access Moria nor pass the door of the Archive of Traceries. The official solution to this problem is to get the attention of a GM and have them help you.

Unofficially, another player can summon you (a Captain or anyone using a consumable rally horn) directly into the Archive of Traceries, where you can exchange 200 Ancient Script for a new Legendary Item that can be used to advance the Chapter 11: Forged Anew quest. You can get the 200 Ancient Script (which are Bound to Account) through any of the following means:

There are many examples of Legendary Items in Tolkien's works, including:

Other named Legendary Items in the Lord of the Rings Online include:

Other Legendary Items existed in Middle-earth throughout the ages; a more complete listing can be found on Wikipedia.