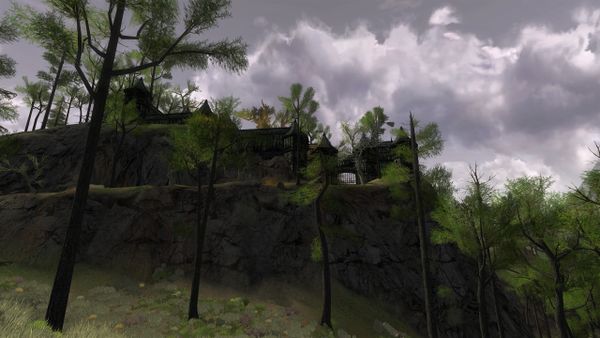 This location was once known as Orod Elon, the "Mountain of the Stars and Stones." Described by Thadúr the Ravager as Tirith dan Forduath, "Guard against the Northern Shadow," it sits atop mountains north-east of Amon Raith. Stoneheight is a target location for the In Their Absence quests. 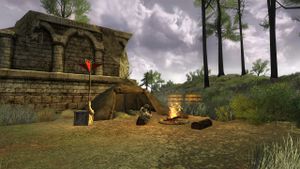 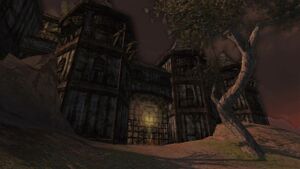 Entrance at the top of the hill

Gundúl has two goblin adds that love to put multiple wound DoTs on you. Either focus fire and burn them down quickly or kite tank Gundúl and one add while burning the other add. Pot wounds immediately as they will stack and be reapplied constantly. After the adds are down, tank and spank Gundúl while interrupting and removing corruptions.

Gundúl will periodically (about every 30s) call out someone's name, at which time he and both adds will attack a random party member. If he calls your name, immediately run as far away as possible. They will give up the chase after a few seconds.

Sometimes the goblins will throw multiple caltrops down at a time that damage and slow. Since you can't see them on the ground, watch your debuff bars for them and run for a bit when they start laying them down.

While the goblin adds can be CCed, any CC will break every time he does this coordinated attack and they will be immune to CC for the next 10s.

When you get to the sleeping wolfhounds, if you are careful not to step on one, you can walk through their midst without fighting any. Otherwise, you have to fight them in groups of three or four (or all 12 in T2). There is an invisible goblin that paths through the latter half of the sleeping wolfhounds, so to be safe wait to kill it near the top of the first stairs.

Straightforward tank and spank with interrupts and corruption removals. A missed interrupt applies a curable heavy wound DoT. The main thing to watch out for is his AOE attack that does lethal damage. He pulls everyone to him and mentions showing you a trick right before he does it. Second thing is the bubble he gives himself at 20% morale points, DPS through or he does a huge AoE hit likely to one-shot most on T2. Búbhosh-grat runs away (at about 8k morale) when he's about to die. He reappears when Dale Truitt's encounter is started. Remove corruptions in order to reduce incoming damage.

Búbhosh-grat tells Dale that he wasn't able to kill the PC's and he pleads for help. On Tier 1, Dale kills Búbhosh-grat. Another tank and spank. When he throws caltrops down, pull him to a clear area and continue fighthing. Occasionally he'll stun and disappear into the fog, then reappear a few seconds later charging for an attack. Interrupt and continue fighting. Rinse and repeat.

Challenge Mode: Defeat Dale Truitt and Bubhosh-grat within 10 seconds of each other.

On Tier 2, PC's must fight both of them. Búbhosh-grat's trick does twice as much damage with every slash as he did the first time. Occasionally, he randomly targets somebody. Dale will also periodically go into stealth and then reappear at a random location in the room (he does actually walk to this location). When he gets there he will do an induction which will cause a random party member to be stunned and receive a large hit of damage - interrupt this if you can. Dale's caltrops do significant damage on T2 (incurable wound), it is important for your tank to move out of them.