Nimrodel is an area located by Echad Andestel, in the southern region of Lothlórien.

The northern branch of Nimrodel 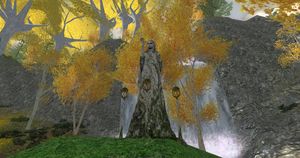 A statue of Nimrodel near the river, which is named after her.

Nimrodel is the name of the river that marks the borders of the woods of Lórien. Any who dare to cross without the consent of the Galadhrim will expect to be shot on the edge of the Lórien side. Nimrodel is actually two separate flows of water that both join the larger Celebrant at almost exactly the same point.

These landmarks are located within Nimrodel:

The river Nimrodel was named after an Elf-maiden of old who once dwelt by a waterfall there, and fell in love with Amroth, the Lord of Lórien. Long ago, they left Lothlórien together for the haven of Edhellond, but Nimrodel disappeared in the White Mountains and her fate remains unknown. In later years, the River Nimrodel served as the site of a watchpost of the Galadhrim, kept by the brothers Haldir, Rúmil, and Orophin.

The waters of Nimrodel are said to bring healing to the weary, and some claim they can hear the voice of the maiden singing in the falls. As the War of the Ring has worsened, the waters have been defiled by the filthy feet of Orcs, and the Elves of Lothlórien seek vengeance. [1]