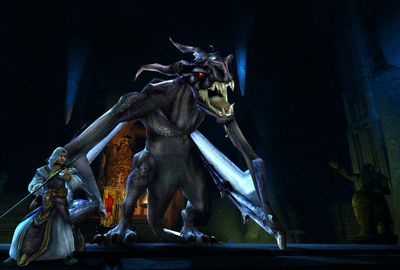 Helegrod: Drake Wing is a 12-man raid instance within Helegrod in the Misty Mountains. [17.9S, 2.2W]

This is the section where drakes dwell, ... pending

For travelling and other details about this location, see Helegrod; this page is an overview of this raid instance.

This instance is scalable; for stats, see each boss individually.

Mobs within all instances:

Bávor Wyrm-brand's Tomb has been overrun by Drakes, Worms and more Angmarim. Watch out for groups of drake eggs lying around, as running too close to them will cause four Drakelings to spawn. Clear the first hall of enemies, then head up the main ramp to a closed gate. Position a player next to each of the two levers located on either side of the main gate. Activating the levers at the same time will cause the gates in the north and south of the hall to open, revealing a Drake and lever in both. It will also spawn a Drake and four Drakelings by the main gate. The two players on the levers must remain on their platforms while the rest of the group takes care of the final two levers, at which point the main gate will open.

Head on through the next areas, which contain a lot more Drakes, Worms and eggs, until you reach two Hill-men in front of a ramp. Do not approach them until everyone is prepared. Have Lore-masters use Blinding Flash on both of the Hill-men, with Burglars ready to provide a backup stun/mezz. If either of them reaches the room at the top of the ramp, they will bring back a large group of Hill-men, and both groups together can be difficult to defeat. Defeat them, then head up the ramp. It is possible to proceed without pulling the additional Hill-men, as long as everyone in the raid makes sure to stay in the middle while going by.

The next hallway or two are uneventful, with the normal groups of mobs. Continue through until you reach a massive hall with a large platform in the middle, on which the Grisgart encounter takes place. Keep in mind that all of the eggs will become active once the encounter begins, and spawn a group of hatch-lings if anyone gets too close.