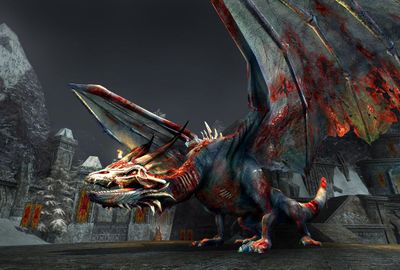 Dragon Wing in Helegrod is a raid instance intended for raid groups of 24 players from level 50 and up. The entrance is located at the top of the Bitter Stair, in the far northern reaches of the Misty Mountains. A Camp Site Fire with a Mustering Horn is found south-west of the stairs, at a camp where Sigrun provides raid quests. [19.1S, 2.9W]

From the entrance, either head down the hill to the south-east, or up to the gates in the east. Choosing to go down the hill leads through numerous pulls of elite bears up to Coldbear. Although it is not necessary to do this encounter in order to progress, he gives additional marks. The fight is very easy, and once he is down head back and proceed to the gates in the east.

Pulling the guards at the gate activates the encounter. Groups of mobs consisting of Krahjarn Scroungers, Krahjarn Healers, Krahjarn Spearmasters and a Gorthorog Defender continually spawn while the drummers live. Defeat all mobs in a group except for one (such as the Gorthorog, who can easily be distinguished from the others and pulled away). Keep a tank and Minstrel on the Gorthorog to prevent more waves of mobs from spawning. The rest of the raid should run through the gate and up to the drums in order to defeat the four Krahjarn Drummers. The Drummers need to be defeated at approximately the same time, or they will revive each other. Once they are down, finish him off any remaining mobs.

Going past the drums leads up to a large stairwell with a gate at the top. The gate will open, revealing three torches. Light the torches to begin the fight with Drugoth the Death-monger.

Drugoth hits fairly hard against non-tanks, and he will split into clones to make the battle more difficult. He splits at 600k health, 400k, and 200k and both the "real" Drugoth, and each of his clones split. When this happens, you will lose your targeting lock on him and he will reappear along with his clone. To keep track of the "real" Drugoth, create a tooltip at the start of the fight when he rises from his coffin by hovering over his body with your mouse until a box appears, then press H. Click this tooltip every time Drugoth splits to re-select the correct one. Each time he splits, he procs a powerful AOE attack that stuns, so the group should spread out at each interval. One tank can try to pick up the clones and kite them. They can also be CCed, or divided up among heavies. Either way, burn down Drugoth as quickly as possible.

Once Drugoth is nearly dead, he will retreat and summon Thorog. You will have a short respite to quickly revive dead members and eat before Thorog descends. There should be enough time for at least one revive per healer.

When the fight begins, the tank should stand on one side of Thorog while the rest of the group spreads out in a semicircle on the other side. Constantly interrupt any inductions which includes an AoE knockback, and quickly kill the Servants of Thorog that spawn. The Servants will constantly heal Thorog if not CCed or killed. Once Thorog reaches around half his health, a Frost Grim called the Spirit of Helegrod will move in a circle around the area and will cause massive damage to anyone in its path; avoid this at all costs. Thorog also inflicts Baleful Eye, a removable Fear debuff that will cause Thorog to instantly kill the player and anyone around him/her if it is not removed in time, so bring fear pots in case the Captains can't clear it in time.

Item:Hood of Probable Cause (Level 85)