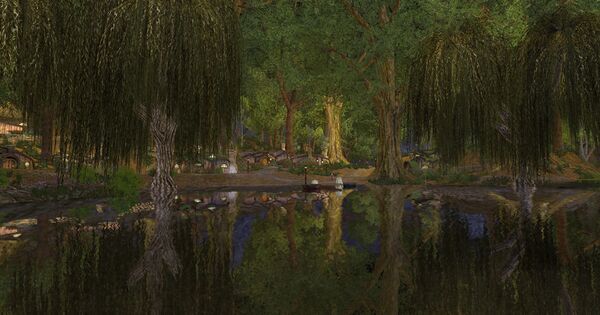 Gamwich is a settlement located within the area of the Yondershire, in the Shire. [24.0S, 82.5W]

The village of Gamwich is the most woody settlement of the Yondershire, with hunting game just around the corner. Or fishing in the river that floats through and forms a pond in the midst of the village.

Gamwich provides the services of a stable-master, supplier, provisioner, healer, and a quartermaster for the Yonder-watch faction. However, here is also one of the very few Hobby Masters of the Middle-earth.

The village of Gamwich was delved in the year 2498 of the Third Age. Though the Elf name for the woodlands hereabout, Arassien, has been lost to all but the most learned in lore, the village of Gamwich is famed for its hunting; the hobbits who settled here felt the same enthusiasm for the chase that once gripped such kings as Gil-galad and Elendil.

Nearly three hundred years after the delving of the town, a family of modest means arose in Yondershire. The import of this family would not be made clear for many years, but the line of Hamfast of Gamwich would eventually prove crucial in the history of not only the Shire but also of Middle-earth itself. The Gamwich name would change over time, first to Gammidge, and then ultimately to Gamgee. The family did not remain in Gamwich for most of its history, removing first to Tighfield and then later spreading through much of the western and central Shire. — Deed