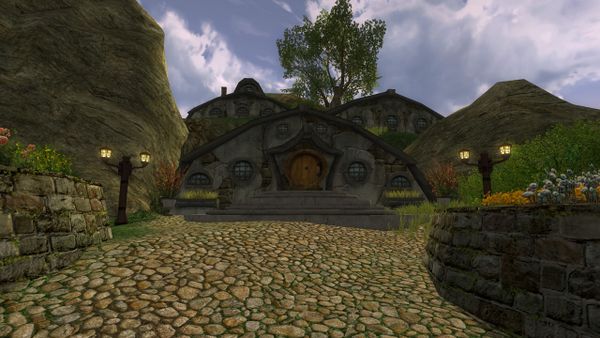 Tuckborough is the chief village of Tookland and home to the Thain of the Shire. Goblins and half-orcs seek to capture it in the name of Sharkey, the brigand chieftain troubling Bree-land and the Shire.

This Skirmish has a minimum level of 20 and is free to all.

This is a scaled instance, designed for level 20 and up.
It is available in the Instance Finder.

Assisting in defence of banners:

These mobs are encountered within Trouble in Tuckborough:

Fight your way around the hill. There are several fenced sections on the hill, each with a gate. Once you have defeated all the mobs in a section, and have captured the flag, the gate will open and allow you to progress around the hill.

Each flag is on top of a hobbit hole. Once you capture the flag a couple of stout hobbits will appear and assist you in repelling any counter-attacks.

Defeat the Filzof, a half-orc, at the doorway to the Great Smials.

Competing the skirmish will reward the Mathom Society Reputation.
Rewards and Loot scale to the level, group size, and tier of the Skirmish. Loot is found by/at/in/from: