The Ford of Bruinen (Skirmish) 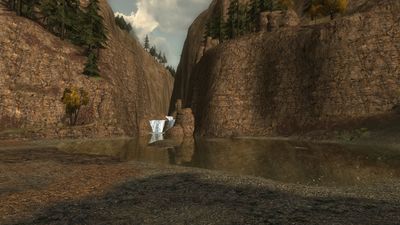 The Ford of Bruinen is a Skirmish which takes place in the Trollshaws. Skirmishes, can be started by using the Instance Finder, (as long as you're not in an instance already).

The Ford of Bruinen is the last bulwark leading into the hidden vale of Rivendell. Orcs in the service of Angmar lay siege at the Ford, seeking to penetrate the defences of Imladris.

Assist in combat, both must survive:

For all possible skirmish lieutenants, see the page Skirmish Lieutenants. The following creatures are encounters within this skirmish:

The Ford of Bruinen Mobs

Elrohir and Elladan, sons of Elrond, are prepared to stand against the army of the Enemy attempting to cross the Bruinen. Elrohir is awaiting your arrival. The sons will help with the fight but its up to you to keep them alive. Its best if you can find a way to keep them together, they tend to fight away from each other which spells trouble. You will fight waves of mobs that fall from the North and South siege towers.

The final boss Níngrat will drop from the center siege tower. Remember to loot either the boss corpse or the chest.

Competing the skirmish will reward Elves of Rivendell Reputation. Rewards and Loot scale to the level, group size, and tier of the Skirmish. Loot is found by/at/in/from:

For by level and tier details see Skirmish Rewards